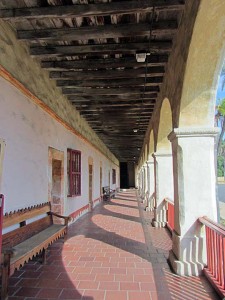 Ballard Inn – Wine countries (by which I don’t mean countries that make wine) have their centers of gravity. Ideally more than one. And so it is that anyone visiting the scattered clusters of vineyards more or less near Santa Maria will probably choose from one of the most obvious basing options. Solvang’s nearly parodic Scandinavian revival, full of hotels both sleek and silly, yet dotted with wine bars, restaurants, and all the temptations of trinketdom? The artificial yet eminently sensible tasting room huddlings of Los Olivos? Or why not the lovely, albeit lengthy, drive in from Santa Barbara’s lavish luxury?

Hey…how about a innocuous little hamlet with no wineries at all, and what seems like one church per resident? Probably not. And yet, querying long-time locals, that’s exactly where I’m directed, over and over.

One comes to the Ballard Inn for several reasons, among them its tranquil isolation. Of course, there’s a major utility project going on right out front, and though attempts are made to mitigate the din it does shatter the promised tranquility somewhat. But a proper inn it is, with all the charming periodicity one could want, and some very comfortable rooms. I’ve had a soft spot in my heart for the inn ever since, several years ago, they’d volunteered a full refund despite a very last-second cancellation due to a family emergency. I vowed I’d return one day.

The natives, though, don’t just name the inn for its lodging. Nice rooms can be had elsewhere in the valleys. The primary focus is on the restaurant, said by more than a few to be offering the best cooking in the area. Well, let’s hope.

Before dinner, there are communal libations, a fine tradition to which much attention is rarely paid anymore.

Kalyra 2010 Sauvignon Blanc (Santa Ynez Valley) – Sauvignon-by-numbers. A little too big for its own good, but perfectly decent. (11/11)

Firestone 2009 Riesling (Central Coast) – Yep, tastes like riesling. Off-dry riesling. Not really much more to say about it, aside from the somewhat chemical turn it takes as it lingers. (11/11)

Carina Cellars 2007 Syrah (Santa Barbara County) – Identifiably pinot noir syrah, with smoke and dark berries. There are flecks of char and dark chocolate shavings, though, and in the end it doesn’t really amount to much. (11/11)

Though the cocktail hour is on the early side, most of the inn’s other residents proceed more or less immediately to dinner; not all of them have the excuse of belonging to the super-senior set, either. As a result, I’m the last one in and, inevitably, the last one out. At the entirely indecent hour of 9 p.m. Well, at least there’ll be plenty of opportunity to sleep.

As for dinner itself, it’s all that’s been promised. Nothing cantankerous, but with a surprising nose-to-tail element creeping onto the menu, everything cooked well and served knowledgably. That includes the wine list, which is a little on the pricey side but does fine work with the local fermenteds…any alternative to which I couldn’t possibly consider while in the area.

Arcadian 2006 Chardonnay Sleepy Hollow (Santa Maria Highlands) – With the caveat that I rarely have much good to say about New World chardonnay unless it comes from Kalin, Rhys, or Varner/Neely, and with the corollary caveat that this is very much a New World chardonnay, there’s a lot here to like: the peachy fruit, thick and rich with roundness and polish, is fulsome enough to resist the minor trappings of caramel dip and buttery drizzle to which this grape is so often treated. Moreover, there’s acidity, and it’s well-integrated. It’s big – very big – and though I think the wine will develop and mature in a mostly pleasant way, I think that size will loom the greater as time passes. (11/11)

Arcadian 2006 Pinot Noir “Jill’s Cuvée” (Santa Maria Valley) – Starts pianissimo, with just a few little bursts of ripe, reddish fruit. These develop into a theme, then a theme with variations, as decorative contrapuntal nut shavings and wet soil aromas enter the work. What starts in subtlety ends in restrained lushness, full-fruited but with elegance that does not diminish even as a piercing trill of acidity rings and echoes long into the coda. There is still an air of rehearsal to this wine, and more work and refinement yet to come, and it will probably never be the most complex of works. But appealing? Oh, yes. You’ll find yourself humming the melody the following day. (11/11)

Gehrs 2008 “Fireside” Port (Amador County) – A very simple idea of port, sweet with dried berries and a late-palate burn of alcohol, but bringing little else to the concept beside the name and the fundamentals of technique. (11/11)

Breakfast the next morning is just as delicious. The following morning, however, is a bit of a disaster; despite arriving nearly fifteen minutes before the close of breakfast, they claim that it’s too late (as if I don’t own a time-telling device), then offer a decidedly uninventive fib that they’d done a head count and determined that everyone had already been served. Since there aren’t more than a dozen guests in the entire inn, that seems a dim view to take of their skill with arithmetic, but…well, rather than argue, I just take my coffee and leftover fruit and go. It does certain damage to my otherwise rosy view of the inn, however, and despite a complaint at checkout they don’t seem particularly apologetic. So while I would still recommend the place, I’d also recommend being on the very early side for breakfast. Or maybe buy the staff an abacus.