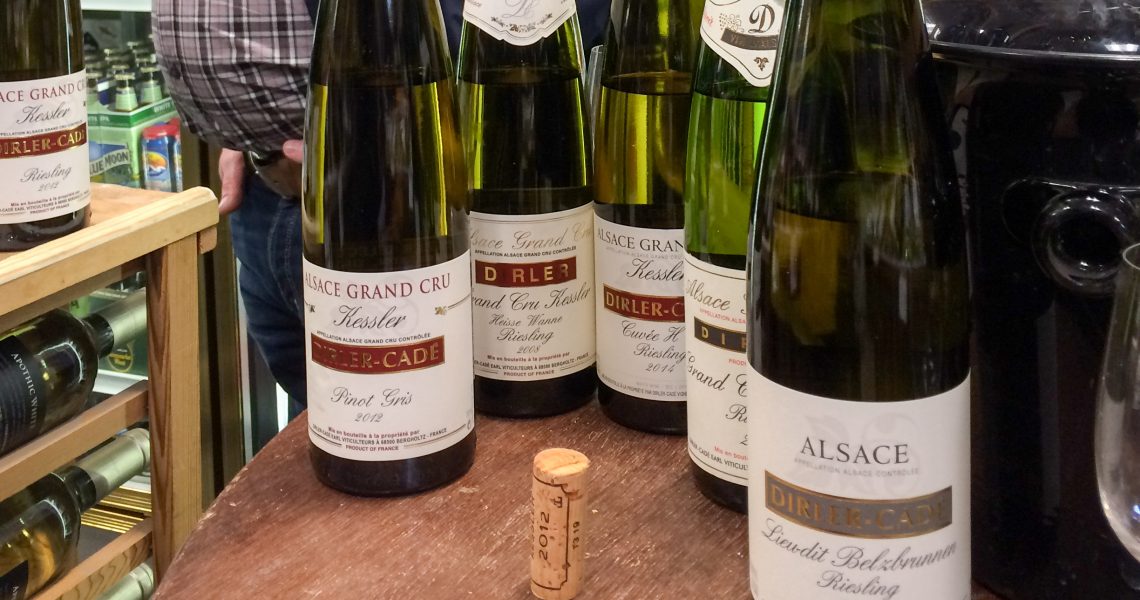 One by one, the pinnacles of Alsace crumble. Sometimes it’s unexpected tragedy — I still have trouble believing that Laurence Faller is gone — and sometimes it’s the fickle winds of the marketplace. But mostly, it’s climate.

Global warming is ruining Alsace. Actually, let’s make that more strident: global warming has ruined Alsace. The region’s “best” vineyards — the solar-collector grand crus of the Haut-Rhin — are often too hot for anything but slow-ripening riesling (sometimes) and grapes that wine law prefers to dissuade from those notable slopes (like sylvaner, or even pinot blanc). Gewurztraminer? Pinot gris? Forget it. Vendanges tardives-level ripeness is sometimes achievable from a good grower’s first harvest, these days. Yet far too many wines are sweet, alcoholic, and just generally huge, lacking any sense of acidity or freshness such behemoths require.

Saving graces could be coming from the cooler Bas-Rhin, where many sites are fully entwined with the lower arms of the Vosges and their cooling breezes, but a majority of the northern producers seem ill-equipped to handle the change in fortunes. While it’s far from clear that the sites in the north are capable of reaching the same heights as their southerly brethren, it also may just be that producer inexperience with making world-class wine is holding back the quality. Loew manages it. So does Gresser. Kreydenweiss is capable of it, but the wines crack up far too quickly. There aren’t all that many others. And even if there were, who would buy them? The market for Alsatian wines has cratered.

Still, there are holdouts. Trimbach, obviously…though the techniques that preserve their house style are a matter of some debate. Lorentz. Blanck. Mann. Some of the (semi-)non-interventionists (Josmeyer, Barmès-Buecher) manage thicker styles with grace. It’s too early to know what’s going to happen at Weinbach.

I’ve been visiting Alsace off and on for almost twenty years, and the options for something local that I actually want to drink with its already weighty cuisine diminish every year. But there’s one producer I return to again and again: Dirler-Cadé.

The wines aren’t always dry (they really can’t be, as the estate’s vineyards are decidedly southerly), but they retain enough nerve that they only occasionally come off as goopy or leaden, the death-knells of modern Alsatian wine. The rieslings, in particular, manage to absorb even a fair bit of residual sugar and deliver it as mere richness; a trick that used to be much more common in Alsace than it is today.

Biodynamic since 1998, Dirler-Cadé (like most Alsatian wineries) releases a dizzying number of wines. While I drink an assortment of them fairly regularly, especially in Alsace, I don’t usually get to taste them in a focused way. And so, the opportunity to taste a selection of the lineup with winemaker Jean Dirler proved irresistible.

(A cautionary note: I was sick during this tasting, and so my notes should be taken with even more salt than usual.)

Sylvaner isn’t allowed to carry the name of any grand cru on which it’s planted, and rectification of that error is long overdue. The raciness of Franconian sylvaner probably can’t be replicated in sun-baked Alsace, but sylvaner is extremely transparent to site, and producers who’ve planted it across a variety of terroirs see a pretty wide range of expressions. In any case, these days Alsace might do better with sylvaner than with pinot gris, in which the former spice-laden loveliness (replicated nowhere else) has been buried by layers of sucrosity.

Dirler-Cadé 2014 Sylvaner “Vieilles Vignes” (Alsace) — From a plot of vines planted in the Kessler in 1957, with some other sources blended in. The varietally typical tomatoes are, here, fully ripe, but there’s more mineral depth and vegetal richness than usual. (5/16)

The Belzbrunnen is one of the zillions of named lieux-dits in Alsace, some of which seem (horrifyingly) destined for the region’s grossly misguided yet mystifyingly lingering premier cru scheme, others of which are not. It’s decomposed sandstone, sand, and clay.

The Spiegel is an east/south-facing vineyard composed of marl and sandstone.

The Kitterlé wraps around the southern end of an outcropping, with a variety of exposures (southeast, south, southwest) and soil variability (sandstone and volcanic sandstone), which causes one to wonder how it ended up being a single grand cru in the first place. (I’m going to take a wild guess: politics.)

The Saering is a mix of marl, limestone, sandstone, facing east and southeast. It seems capable of a pretty wide range of expressions, but one thing it usually retains is power.

The Kessler is a southeast-facing mix of sandy clay and sandstone, and there’s a clear relationship between the size of Dirler-Cadé’s wines from this grand cru and the somewhat increased heat of the vineyard…especially from the lieu-dit Heisse Wanne, which in modern times seems to be translated as “hot tub,” but really just means a warmer basin within the boundaries of the Kessler.

Dirler-Cadé 2012 Pinot Gris Kessler (Alsace) — Pear syrup and fennel. There’s some acid attempting to battle back the sugar, but it’s a futile effort. (5/16)

Dirler-Cadé 2001 Gewurztraminer Kessler (Alsace) — Dried roses, peach nectar, and cashew. Only a little dusting of pork. In other words, varietally true and aging quite well; I wouldn’t be surprised if this kept going for a while. (5/16)