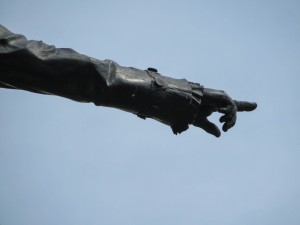 Of the two thunderclouds that loomed over digital newsstands yesterday, it was the former that promised all the hail, but the latter that brought the actual tempest.

(The sex thing? Read it yourself. It’s a solid and thoughtful review of a thoroughly predictable bit of paleocultural juvenilia from natural winemakers.)

But it was McKenna, the eternally-unnamed partner of Louis/Dressner Selections, that — in one righteous and decidedly peeved essay — left the deeper marks.

More than a few eyebrows were likely raised at the mere existence of McKenna’s rant, for while he’s been the silent partner (in terms of his company’s name) for a very long time now, he’s also rarely been one to vent his spleen — or any other organ — in quite this fashion, at least not in a public forum. Mostly, he’s gone about his work with quiet skill, and along the way he’s gained almost universal respect for the quality of that work. (I pointlessly hedge with “almost universal” even though I’ve never heard anyone say an even vaguely unkind word about the guy. Certainly I wouldn’t.)

While there’s always more than one side to any story, I think McKenna’s complaints — that people are using and/or misrepresenting the reputation and the brand-building done by his company for their own commercial ends, and sometimes much worse — are entirely legitimate. The rise of micro-niche importers, while an extremely welcome development for customers and wineries alike, is inevitably going to lead to conflicts just like this. And while the three principal targets of McKenna’s ire seem to inhabit different tiers of offense, it’s not only about bad actors; even the well-meaning are eventually going to run afoul of someone. It’s the nature of a competitive business in which the entire sales pitch is about difference.

Anyway, it’s not my place to adjudicate the various beefs here. Potential customers can sort this all out for themselves, if they care. It would be nice, or at the very least polite, for tradespeople to eschew lying as a business tactic, but only a very delicate flower indeed would fail to recognize that it’s going to happen and one needs to be wary of it. The danger of the open internet that McKenna identifies aside, he does have that same recourse available to him…one which wouldn’t have been available to him a few decades ago. And judging by the number of times his complaint has been shared on social media, I think his point has been rather soundly reinforced.

The important core of McKenna’s argument aside, one minor detail struck me as somewhat ironic:

And sure, maybe I idealize the past or perhaps was a bit wide-eyed and naïve. Or perhaps I was not in a position to see the uglier side of things, which I am sure existed. But I still believe that for the most part, there was guiding principle to work with integrity, manners and mutual respect […]

As I’ve never heard anyone speak ill of McKenna, neither have I heard McKenna speak more than irritably about anyone else (again, I’m sure he has…I just haven’t heard it), which is part of why his anger here is so striking. But he certainly used to work with someone who was a frequent and sometimes relentless source of ugliness and ill-manners, and not just in his more common jocular fashion, towards other people in the trade. Importers included.

Once, as a very naïve and wide-eyed proto-writer, I made the mistake of bringing up McKenna’s company in the presence of a longer-established importer of considerable reputation. They shared, in those days, a few common producers, and I blithely assumed that they’d divvied up the geographical sales territory and all was well between the two firms.

Not so, if the twenty-minute barrage of invective to which I was treated was any indication.

Again: I don’t know the truth of the matter, felt far too bludgeoned to research it at the time (assuming anyone would have told me the truth, which I soon found was not something that most importers willingly did when it came to the hard facts of business), and in any case it scarcely matters so many years later. But it was the moment where I began to actually listen to the constant whispers and grumbles while navigating around the trade as both writer and customer. And what I found was just as much invective and ill-will as bonhomie, at all levels.

(Except one: winemakers, in general, were and are a pretty good-natured, laissez-faire lot. Yes, there are a few outliers. And no, they don’t always care for critics, but then why should they?)

Now, I’ve no doubt that given the choice between aggravating commentators and ankle-biting competition versus the decades in which the liquor business was run by you know who, most importers would gladly suffer the slings of WordPress and the arrows of Blogger. These days, no one is likely to die at the hands of the competition. But I’m not sure McKenna’s rosy utopia ever really existed in quite the way he perceived. I think that it’s more likely that, as ever, like-minded people coalesced around each other and — within those self-sustaining communities of preference and commerce — all seemed relatively frictionless. It always looks a little different from the outside.

On a much happier note, last Sunday Louis/Dressner got together with Zev Rovine, Selection Massale, Fifi and PM Spirits to do a tasting together under the same roof. The energy was incredible, the crowd was great and the festivities went well into the night.

It doesn’t have to be ugly. Niche importers can, and in an ideal world should, band together. They can’t really fight the deafening roar of the behemoth mega-firms, but if they have to shout to be heard anyway, it would be better if they weren’t shouting at each other.