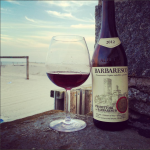 Produttori del Barbaresco 2012 Barbaresco (Piedmont) — Particularly…perhaps even unusually…approachable. Mostly crushed and dusted flower petals, with some soft earth. By general standards it seems beautifully in balance, which of course makes me wonder if it’s in nebbiolo-balance. In any case, it’s one that will be hard to not drink, because it’s so appealing right now. And finding nebbiolo that requires patience isn’t exactly difficult. (5/16)

Produttori del Barbaresco 2006 Barbaresco (Piedmont) – L.10.155, for those keeping track. A really nice wine, with the dry structure and dried aromatics of a fine nebbiolo. It’s blendedness keeps it from expressing any particulars from its place, yet it does taste like a Barbaresco. (7/11)

Produttori del Barbaresco 2006 Barbaresco (Piedmont) – I don’t know that I’d often be moved to call any Bararesco not issuing from the house of Gaja or their brethren as “lush,” but there’s a certain lushness to the granulated flower petal aromatics of this wine that have always been part of its early appeal. That said, it’s less fleshy than it was at release, already retreating behind tannin that (again, in context) seemed a little smoother and more approachable than normal. It needs food right now, but very soon all it’s going to need is time. (9/11)

Produttori del Barbaresco 1996 Barbaresco Pora “Riserva” (Piedmont) – A recent purchase. Citrus, chalky tannins, gravel soup, and old woods harboring a memory of animal inhabitants long passed. (Not “old wood.” Old woods. Like an elderly forest.) A little worse for its wear. Intact bottles could be better, and if so perhaps not yet ready. (5/10)

Produttori del Barbaresco 2005 Barbaresco (Piedmont) – Very tannic and brutish, with flailing acidity and a biting lash of tart red fruit. Powerful and concentrated in a way that’s perhaps not expected from this basic blend, with sour cherry mostarda taking control of the finish. Very, very young. (3/10)