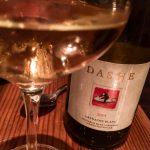 Dashe 2014 Grenache Blanc Monarch Mine (Sierra Foothills) — My adoration for Dashe is so wide-ranging that I’m surprised just how boring I find this wine. Maybe time will help? There’s nothing at all wrong with it…perhaps a touch of heat, but nothing unmanageable…but it just sits there; grenache blanc in weight and palate density but not in aromatics. One of the more surprising, even absurd, conclusions I’ve come to over the years is that Paso Robles — quite possibly the least interesting region in California for my palate and preferences — is the source of the most interesting grenache blanc. And yes, I include France in that tally. (9/16)

Dashe 1999 Zinfandel Todd Brothers Ranch (Alexander Valley) — Some of these are fruitier than others, some are more resolved than others, but they all have this in common: dirt and a hard-edged structure. This is one of the gentler, more aromatically generous versions, and it’s eminently approachable. (7/16)

Dashe “Les Enfants Terribles” 2014 Zinfandel Heart Arrow Ranch (Mendocino County) — 13.8%, native yeast. I remember the first vintages of this experiment, which were usually tasty, but rather loose and a bit wild…nudging into the natural realm without seeming to feel confident in any particular world. Since then, control (of a sort) as been reasserted. I think it would be fair to call Mike Dashe a structuralist — certainly the rest of his zinfandels are firm, unquestioned candidates for aging — and while this remains unlike the “normal” zins, it adds just enough structure and form to its boisterous (but not explosive) mélange of berries, barks, needles, and dusts that it feels entirely cohesive and self-possessed. Another wine I’d like to have on permanent, free-flowing tap. (6/16)

Dashe “Les Enfants Terribles” 2014 Carignane Evangelho “Old Vines” (Contra Costa County) — 12.9%. Fun, bubbly fruit of the dark-skinned variety. Glou-glou without the irritating volatility and carbonic Beaujolais sameness that pervades the genre. I would like to order several kegs of this, please. (6/16)

Dashe 2012 “The Comet” (Alexander Valley) — The thing I’ve always loved about Dashe’s wines is how they marry a considerable bit of Californian power with structure. I’d rarely call them elegant, but then that’s not really why I buy them. That said, this is a big thud of fairly anonymous fruit, and while it’s certainly not bad, it’s the least interesting wine I think I’ve ever tasted from this much-admired winery. Oh well. (5/16)

Dashe 2006 Zinfandel (Dry Creek Valley) – Muscular, but its structure is just beginning to turn graphite-like, which makes the wine feel a bit lighter than it actually is. And it’s not light. Dark boysenberry and olallieberry, little shocks of black dirt and peppercorn, and a pleasant leafiness somewhere in the foundation; this is very confident zinfandel. (7/12)

Dashe 2007 Zinfandel (Dry Creek Valley) – Dark little berries, each one offering a tiny explosion of slightly tannic fruit, in a twisted-vine broth of surprising structural lightness; the overall effect is thus one of heft without overt density, of strength without force. Aside from a little dusting of black pepper, it lacks the further complexities one expects from the very best zinfandels, but it delivers everything – fruit, acid, just enough structure – one wants from the grape, without the baggage of booze and volatility that so often hitchhikes. I think it will age for a few years, if one is so-inclined. (9/10)