Torres 2010 “Viña Esmeralda” Moscato (Cataluña) – Sweet, simple, friendly, boring in a very predictable way. I’m glad for the world’s commercial wine ventures that muscat’s popularity is exploding, because drinkable muscat is something all but the truly incompetent can pretty much make in their sleep. And if it means grafting over a few zillion acres of useless chardonnay, all the better. (2/12)

Bera 2006 Canelli “Arcese” (Piedmont) – “It’s cider!” remarks one dinner guest. Well, yes, in a way; anti-naturalistas will point and complain. And it’s true that it’s not very much like what it used to be. But lingering memories of muscat and a reminiscence of something that was almost, but not quite, sparkling do still mark the wine. What marks it more, at the moment, is a skin-bitterness that I think helps along the sensation of apple-derivation. All that said, the basic “problem” is mostly just that it rewards being held this long in odd and difficult ways, and it’s probably better to drink it earlier. (8/11)

Paolo Marcarino 2007 Moscato d’Asti “Lucifero” (Piedmont) – Paper scented with mercaptans, and not particularly sweet even within its genre. This reminds me a bit of a Léclapart Champagne, and it also reminds me that I’ve never liked Léclapart Champagne. Orange blossom and some freshly-fired ash contribute to the discussion, but only in monosyllables. Many of my fellow tasters like this, but I do not. (3/10)

Saracco 2009 Moscato d’Asti (Piedmont) – Bright apple foam, lightly perfumed and joyous, but with a serious face as well. Neither pure fun nor overly aspirational, but forging a middle path. (3/10) 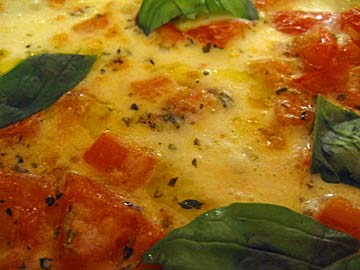 It has been pointed out to me, more than once, that no one in Italy drinks wine with pizza. I don’t know that this is true – I’ve seen it – but it is certainly not the majority choice.

But our blogging team, gathered in the pleasant chill of an early Asti evening, is if nothing else a collection of wine dorks. And so wine it will be, with Milanese-influenced pizza at Francese (via dei Cappellai 15, Asti). Lots of it, as well.

The pizzas? Crispy at the exterior, mushy in the middle – the thing A16 always gets dinged for, even though they’re doing it correctly – with intense ingredients dealt to the pizza’s upper surface with the restrained hand of the Italian rather than the lavish hand of the American. But the truth is, authenticity and appeal are not necessarily the same thing, and while I appreciate the presence of either, my personal preference is for a more cracker-like crust. The relative thinness of toppings doesn’t bother me (it depends on the specifics), and I find the balance and purity of our DOP mozzarella, basil, and tomato very nearly perfect. I just wish there was a less “authentic” crust. Our pizzas are followed by a series of cake-like desserts that are lovely in their rich simplicity, but filling to the extreme.

Jeremy Parzen, our team leader and renaissance guru of all things Italianate – on which see below for more – is a trip and a half in his escalating (as the wine flows) mix of loquacity and a certain thoughtful despondency. As the evening progresses, he turns into a one-man quote machine, for both good and ill. Much of what he says I am compelled to redact for reasons of propriety, but here’s a brief sample of his wisdom: 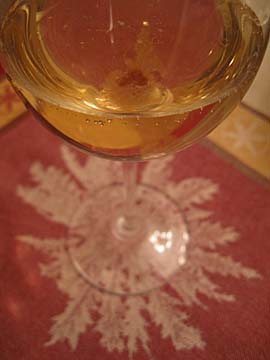 “I’ve got a fuckin’ PhD in Italian poetry, fuckin’…Thor.”

“This [moscato d’Asti] is the number one strip club wine in America, because strippers love it.”

San Francesco 2008 Costa d’Amalfi “per eva” (Campania) – A blend of falanghina, pepella, and ginestra. Sounds more like an opera than a wine, to me. Anyway, it’s a touch spritzy, full of lime and lemongrass, with a surprising chalkiness that sneaks up, takes over for a moment, and then skitters away. Sour bones of structure and pale decay clutter up the finish. Very interesting.

Oddero 2001 Barolo Rocche di Castiglione (Piedmont) – Already fairly mature in some ways, with its soil turned pepper-powdery and the fruit having yielded to well-dried black roses. Old tar, laid long ago with aspiration, through a long-fallow field permeates both the tar and the structure. The finish is soil-derived but powdery. Very approachable, and despite all expectations I’d consider drinking this nowish.

Ratti 2001 Barolo Marcenasco (Piedmont) – Light and dirty, with a lift to it despite the dark-fruited, brooding core. Crushed flowers everywhere. This is still developing, and while there are prematurely mature elements present, the wine itself is still reasonably firm and grippy, and will need another five-plus years (at the very least to yield its full range of aromatic complexity. 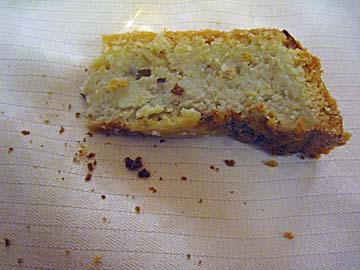 Produttori del Barbaresco 2005 Barbaresco (Piedmont) – Very tannic and brutish, with flailing acidity and a biting lash of tart red fruit. Powerful and concentrated in a way that’s perhaps not expected from this basic blend, with sour cherry mostarda taking control of the finish. Very, very young.

Forteto della Luja Loazzolo (Piedmont) – A moscato passito, piney and floral, with a giant burst of intensity that comes up short. Striking for its moment, but that moment is soon lost.

Saracco 2009 Moscato d’Asti (Piedmont) – Bright apple foam, lightly perfumed and joyous, but with a serious face as well. Neither pure fun nor overly aspirational, but forging a middle path.

Vajra 2008 Moscato d’Asti (Piedmont) – No mistaking what this is. But in addition to the usual flower shop/perfume truck accident, there’s weight, and texture beyond the fizz, and even some smoothly polished minerality. It’s not heavy (nor is it my brother), but it’s more interesting than most within the genre. (1/10)

Lageder 2007 Moscato Giallo Vogelmaier (Alto Adige) – Nectarines infused with the usual wild muscat perfume. The fruit helps reign the aromatics into something better-suited for genteel company, and there’s an appealing rock salt counterpoint as well. The only drawback is that, as with most muscats, the wine tends to dominate almost any food with which it’s served, so it’s probably best-suited as an apéritif. (8/09)

Bera 2006 Cannelli “Arcese” (Piedmont) – Open for four days by the time I get to it, but still hanging onto sweet-smelling, perfumed garden fruit and a deliberate lightness. Pretty, even in its diminished state. (7/09)