Trimbach 2001 Riesling “Cuvée Frédéric Émile” “Vendanges Tardives” (Alsace) — Soft steel dripping with dewsparkle and the sweet nectar of honeysuckle. Beautifully balanced, precise, yet the sweetness is a bigger factor than the heft at the moment. More age? Perhaps. (7/16)

Trimbach 1998 Riesling “Cuvée Frédéric Émile” (Alsace) — Fully mature. The dust of a once-mighty civilization, reduced to corroded steel and acid rain. Like drinking a raw nerve. Absolutely delicious, and everything I ever hoped when I chose to age this by the case. (4/16) 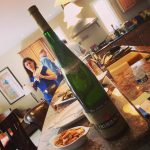 Trimbach 1995 Riesling “Cuvée Frédérique Émile” (Alsace) — From magnum…and let me say, for the record, that the John Holmes-ian stature of a Trimbach magnum is a sight to behold. Wielding this giant phallic symbol deftly enough to connect wine with glass is a multi-handed operation, yet the wine is far less forbidding than its pour. In fact it’s a fairly straightforward CFE, its iron and steel fully exposed but with the filigreed detail eroded. It’s lost none of its nerve nor its high-polarity lines of force, yet the overall energy feels diminished and buffeted. Perhaps catching it a bit younger would have been better? (Disclosure: this bottle was a gift from Jean Trimbach, from a 1998 visit to the winery.) (4/16)

Trimbach 1998 Riesling “Cuvée Frédérique Émile” (Alsace) – Not decanted. There’s some friendly disagreement about this wine; I think it’s still closed, another taster – also quite familiar with the wine – thinks it’s tiring. (It’s not, for the concerned, suffering from premature oxidation.) It’s true that it’s not showing much other than a milky mineralistic texture and a restrained yet tense structure, but the duration of its persistence without weakening is what convinces me that it’s intact and progressing properly. (5/12)

Trimbach 2002 Riesling “Cuvée Frédéric Émile” (Alsace) – The 2000, 2001, and 2002 vintages at Trimbach are quite the epic trilogy, and like 1988-1990 before them each has its own character. It’s still very early days for the 2002 (there are few houses about which one can say that for a riesling at age nine), and the differences between it and the 2001 are clearer than they were just a few years ago. Headier than its slightly older brother, driven as much by body as by pointed intensity, yet no less forceful, the 2002 is going to drink a lot better, sooner, than the 2001 ever has. But I think it will reward just as much aging, ending up as a somewhat rounder form of the molten iron that is all great CFEs’ destiny. (1/12)

Trimbach 1999 Riesling “Cuvée Frédéric Émile” (Alsace) – A little oxidized, a lot unpleasant. Maybe low-level taint, though it was below my threshold if so. The previous bottle was drinking extremely well, so I have to presume cork failure in one or more ways on this one. (10/11)

Trimbach 1999 Riesling “Cuvée Frédéric Émile” (Alsace) – Better, but still not all that good. The brushed, anti-gloss metallicism is on display, as it was not in the previous wine, and there’s a little texture. But nowhere near what there should be, and the finish is attenuated. I think the rest of my bottles are going to be opened rather quickly. (10/11)

Trimbach 1999 Riesling “Cuvée Frédéric Émile” (Alsace) – Riesling popsicle, or perhaps sno-cone (Philadelphia water ice?), with a dry syrup of Makrut lime leaves and aromatic straw. Very long, with all the trappings of a majesty it just doesn’t achieve. There’s a lack of sufficient acidity, for one thing, and the narrative complexity typical of the wine ends somewhere in the middle of the second chapter. In some ways, this wine is ready to drink and probably won’t reward more cellaring. In others, it’s perpetually unready; a failed dauphin. (8/11)

Trimbach 1994 Riesling “Cuvée Frédéric Émile” (Alsace) – Drying. Salted vegetables, nut-infused metals. Round but with tattered edges and borders, and occasionally dallying with a swampy character. Thickens and broadens with air, to the point that – twenty-four hours later, it’s actually better than it was at opening. But it’s still tottering on its last legs. It’s not bad, it’s just prematurely old. (1/11)

Trimbach 1989 Riesling “Cuvée Frédéric Émile” (Alsace) – By a fair margin the worst bottle of this I’ve had. Concentrated and full-bodied, but it’s a body comprised of not much other than beige mineral weight. It grows intensity over a few hours, and maybe there’s a faint suggestion of browned-out fruit, but not much else. Whatever the usual state and quality of the wine (which have, in turn, been vibrant and considerable), this bottle’s past it. (5/10)

Trimbach 1997 Riesling “Cuvée Frédéric Émile” (Alsace) – Opened after a short run of other producers’ ‘97s raised some cause for concern. Well, there’s nothing to worry about here. It’s rich, and already into its creamy, mature stage, with soft minerality blown through a dusty wind tunnel. A little shy at first, it expands and gains firmness as it aerates. Not a touch of oxidation, and really good. If you own this in quantity, it’s time to start drinking, but if you don’t there’s certainly no hurry. (3/10)