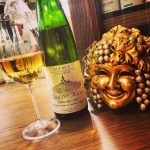 Trimbach 1998 Riesling Clos Ste-Hune (Alsace) — The dreaded premature oxidation that has afflicted a number of turn-of-the-millennium wines from Trimbach rears its ugly head here. It’s far from total obliteration, but it’s persistent and dulls every bit of the experience. Behind the stale tin there’s a round, almost boisterous core of salty iron and fir needles, but among the other affects of the oxidation are an attenuated finish. The wine actually gains strength with time out of bottle, but the flaw never really goes away. A shame. (6/16) 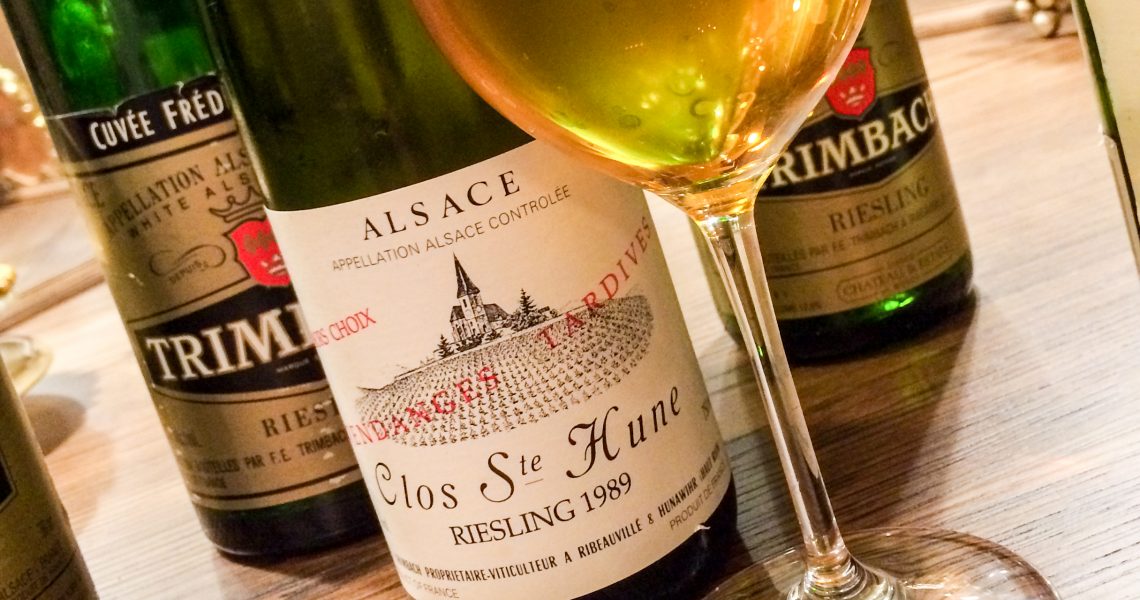 I don’t normally include tasting notes in the the blog’s main feed (they’re exiled here), because I feel that they’re one of the least interesting ways to talk about wine. (The worst are point or ranking systems, of course.) But this bottle overflows with personal meaning…both its past and its present…and to relegate it to a word-salad of descriptors was to do it, and me, a disservice.

I can only find four instances of Trimbach doling out the incredibly rare “Hors Choix” designation, though there may be more about which I don’t know. Two were for sélection des grains nobles bottlings that were/are so overwhelmingly sweet that finding a sensible occasion to open them is virtually impossible. (Not that they’re in any danger of fading; they may well be essentially deathless.) I own one of those — a gewurztraminer so dark brown with botrytis that I think even the richest possible pâté de foie gras might fade into nothingness — and while it’s unquestionably an extraordinary experience, it’s more or less the Sagrada Familia of wine: impressive to admire, to be sure, but what does one do with it?

END_OF_DOCUMENT_TOKEN_TO_BE_REPLACED

Trimbach 2001 Riesling Clos Ste-Hune (Alsace) – Open two days, before which it was described to me as tasting like a Shun knife. After all that aeration? Pine and Rainier cherry skins, white leaves, peonies. Cylindrical and focused, despite a lot of textural generosity – perhaps density is a better word, for this is an intensely gravitic wine – and not without its showy aspects, either. This is going to be a stunner…not that anyone who tasted it at release will be surprised to hear that. (1/11)

Trimbach 1998 Riesling Clos Ste-Hune (Alsace) – 375 ml. This has gotten past being tight and angry. Now, I’d call it truculent. The minerals, which abound, have salted up, and there are the first stirrings of whiplash texture struggling to emerge from jaws-of-iron structure, but while drinking this wine is no longer an epic struggle, it does feel like one is drinking that struggle. Even from half-bottle, this needs a long, long time. (8/08)

Trimbach 2001 Riesling Clos Ste-Hune (Alsace) – Harvested on October 4th. Sea salt and profoundly aromatic white mountain flowers. Incredibly dry, massively fully-bodied (for a riesling), and seesawing between tart, apple-dominated fruit and a lush texture. The acidity is terrific, the balance is flawless, and the finish is stunning. Virtually perfect wine. (5/06)

Trimbach 2000 Riesling Clos Ste-Hune (Alsace) – Harvested on September 3rd. Lusher than the 2001, primarily in terms of its floral aspect, with a neon-tinged minerality in the guise of a fluorescent granite table. Dry, big, and even a little bit fat (though obviously this is a contextual assessment), with a slightly shorter finish than I’d like. Very good, and while it should stay that way for a decade – at least – I don’t think it will be one of the greats. (5/06)

Trimbach 1999 Riesling Clos Ste-Hune (Alsace) – Pierre calls this a “solar eclipse” vintage, though it’s not completely clear what he intends to suggest with that datum. The ’99 was also the victim of unfortunate timing, with a green harvest immediately followed by a damaging hailstorm…nature’s own, non-selective, version of crop-thinning. There’s salt from a shaker, plus smoke and dried apple seeds, and then the wine seems to accelerate as it picks up a crystalline wind, broadening on the midpalate and showing the barest hints of an early, minor, and pleasant oxidation. The finish is a little shorter than it should be, and comes across as a little leafy. Quite good, but probably one of the weaker efforts in recent years, though when the subject is Ste-Hune that’s praising with faint damn. (5/06)

Trimbach 1997 Riesling Clos Ste-Hune (Alsace) – Dried flowers bathed in humidity, which somewhat mutes the nose. The palate is bigger, showing juicy and ripe apple over stones, with good acidity. The finish is flat; this and other signs suggest that the wine is somewhat closed, though not as thoroughly as is the norm for CSH. (5/06)