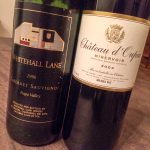 Whitehall Lane 1996 Cabernet Sauvignon (Napa Valley) — Falling apart. I don’t necessarily mean that it’s over the hill, just that the seams and edges are torn and battered, and the center’s not strong enough to hold. Tired dark berries under well-trodden shoe leather. (11/16)

Corison 2004 Cabernet Sauvignon (Napa Valley) — Advancing more quickly than I’d have guessed, though it’s still far from home. All the dust and minerality one could want, with fine-grained wood seamlessly integrated with tobacco and dark particulate fruit. Lovely and balanced, as Corison almost always is. (7/16)

Alta Maria 2006 Cabernet Sauvignon (Santa Ynez Valley) – Were this from a more recent vintage, the appellation would apparently be Happy Canyon. A mix of ripe and green tannin…and if the first thing I write about a wine is a description of its tannin, one can assume they’re prominent…chocolate, and cloves. Note, also, that I haven’t actually mentioned anything in the fruit realm; between tannin and barrel, there’s not much else to this.

Onetangi Road 2000 Cabernet Sauvignon/Merlot/Malbec “Reserve” (Waiheke Island) – After a picture of this half-emptied bottle hit Facebook, one friend asked me if what I was tasting was representative of Waiheke Island’s climate. My answer, then and now, was that it’s really hard to tell. There do seem to be some fairly distinct mesoclimates on what’s a relatively small island, but I suspect that the greater differences are competency-related. It’s perhaps worth noting that this winery doesn’t appear to exist anymore. As for the wine itself, it’s green beyond where even a traditionalist would wish it to be (better Waiheke Island Bordeaux-style blends retain an appealing proportion of varietally-essential pyrazines), and getting to that strange point where the green is mixed with a gummy purple texture that’s just not all that appealing. It’s not bad, but blind I’d guess some supermarket Chilean wine from an operation that didn’t have the money to slather industrial winemaking makeup over the thing. (12/11)

Chateau Souverain 2000 Cabernet Sauvignon (Alexander Valley) – Club-fisted and ham-handed cabernet of acceptable quality. It hasn’t done anything I’d identify as “age,” but has instead just gotten older; drying out, turning from dark berry to dried herb and green tobacco, and dusting everything with slightly stale black pepper. That may be harsher than the wine as it exists deserves, because it’s a fair expression of grape and, to the extent that such can be discerned, a vague sort of place, but unless I’m very wrong (which would mean the wine’s just in a closed stage, though its general fulsomeness suggests otherwise), I don’t think it’s going anywhere more interesting anytime soon. Or not soon, either. (9/11)

Smoking Loon 2005 Cabernet Sauvignon (California) – Yes, really. It was a gift, of course, forgotten in the cellar until now. And though it had to be opened for, um “research,” I expected not industrial dreck, but a dead wine due to closure failure. Well, it’s not dead. Far from it, actually. As for the taste…you know that fake blueberry pie thingy that can sit on convenience store shelves, at room temperature, for damn nigh ever? The nasty, sticky syntheticism of it, akin to no actual product of nature? It tastes like that. Exactly like that. (5/11)

Cedar Knoll 2005 Cabernet Sauvignon (Napa Valley) – Weedy and underripe, with nasty green tannin suffused with stale cigarette ash, then treated to a burnt licorice overoaking and nasty, rancid buttering. I can’t get this out of my mouth fast enough. (9/10)

Sainsbury’s Cabernet Sauvignon (Valle Central) – Why the language switch for the appellation between this and the sauvignon blanc, I don’t know. I’m sure some focus group, somewhere, knows the answer. Sweet green pepper, synthetic and sticky fruit. I rarely think the cabernets are ideal candidates for cellar-dwelling price points, and sauvignon even less so than franc. This wine demonstrates why. An underripe festival of pyrazines would be one thing, but to add the sticky, plastic sugar element just to make things “more palatable” is triply wretched. No bargain at any cost. (3/11)