Lenoir 2001 Chinon “Les Roches” (Loire) — Papillote layers of fine-grained earth, the baritone hum of a pastoral countryside, light grit. A wine you want to chew. And can. (7/16) 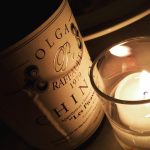 Olga Raffault 1979 Chinon Les Picasses (Loire) — Genius wine in the full-throated prime of its life, and in fact so far from being on the downslope that it’s hilarious. Dark, leathery, peppery, and yet heavily-fruited. Kaleidoscopic soul. (5/16)

Jackalope Cellars 2014 Cabernet Franc Quady North (Applegate Valley) — There’s a tense moment of promise, as there so often is with aromatically forward cabernet franc, but then there’s a bewildering yet overwhelming lactic character that blankets and eventually consumes the wine. There’s little value in (my) speculation regarding the reason, though I’d hope the winery would address it…but whatever it is, the wine would be vastly better without it. (4/16)

Couly-Dutheil 2008 Chinon “La Baronnie Madeleine” (Loire) – A lovely, light-bodied Chinon, with pale earth, mixed dark green herbs, and tangy red fruit. The thing is, while it’s all nice enough, it feels as if I’m drinking it through a gauzy mask…as if the wine’s full expression is being held back somehow. I don’t mind something in the middle range between bistro Chinon and the “real” thing, but I don’t think Couly-Dutheil’s history suggests that it should be inhabiting that range, and yet it fairly often does. Or maybe I’m being overly demanding. (7/12)

Cousin 2009 Vin de Table “Anjou Pur Breton” (Loire) – Capital-N Natural, here expressed in an untamed carnival ride of spike, froth, brett, and electricity. May once have had illicit relations with a lambic, given the strong family resemblance. The tannins are oddly sandpapery. It’s not exactly easy to love, but I quite like it…it’s worth noting, however, than one drinking companion – no stranger to the category’s eccentricities – pronounces it “the worst wine I’ve ever tasted.” I can’t say that I’m surprised by the extremity of reaction, because there’s zero compromise in this wine. (4/12)

Filliatreau 2005 Saumur (Loire) – The usual crapshoot of a wine under plastic. This one’s OK, which is an improvement on most. Chewy, dirty, herbal, dark, with a hint of cough drop and that nasty, scraping, abrasive tannin that is almost a signature of synthetic cork failure (though the particular chemistry involved eludes me; it’s not how oxidation usually works). (1/12)

Guion 2009 Bourgueil “Cuvée Domaine” (Loire) – Hard. Surprisingly hard. There’s some barely-viewable blackened herbfruit behind the barbed tannic fencing, but this wine is under maximum security at the moment. Some extended aeration might have helped, but I lacked sufficient opportunity. (12/11)

Breton 2005 Bourgueil “Nuits d’Ivresse” (Loire) – Since I’m incapable of holding on to this wine long enough to see how it ages, I have to rely on more responsible pals to find out how long the nights of drunkenness can last. It turns out: at least this long, and quite possibly longer. This is one of the most overtly appealing wines from this appellation, grape, or producer I’ve ever tasted…it practically sings with polychromatic beauty. (10/11)

Filliatreau 2005 Saumur (Loire) – Barely surviving, maybe 10% of what it was., and drinkable only through a lack of any actual characteristics worth noting. I should remove the capsules from any bottle I might possibly suspect of harboring a plastic cork, though I’d not actually have predicted that this would be one of them. Oh well, only four more bottles to pour down the drain… (Yes, yes, I know I should just make vinegar.) (10/11)

Filliatreau 2005 Saumur (Loire) – Stewed tar and razors on a bed of coal. There’s a little bit of lingering, oxidized black currant. But the “cork” killed this bottle. (10/11)

C&P Breton 1997 Chinon Les Picasses (Loire) – Really beautiful, singing in full-throated joy at its maturity (which is probably at peak right now, though it will almost certainly hold for a good while longer, after which softer melodies will be what it offers). Black and dark green herbs, grass, tobacco, dusty coal-black minerality, and a sawtooth-edged structure…all of which somehow managed to, in concert, present themselves as strangely “pretty.” I love this wine, and wish I had a lot more of it, rather than just a few bottles. (9/11)