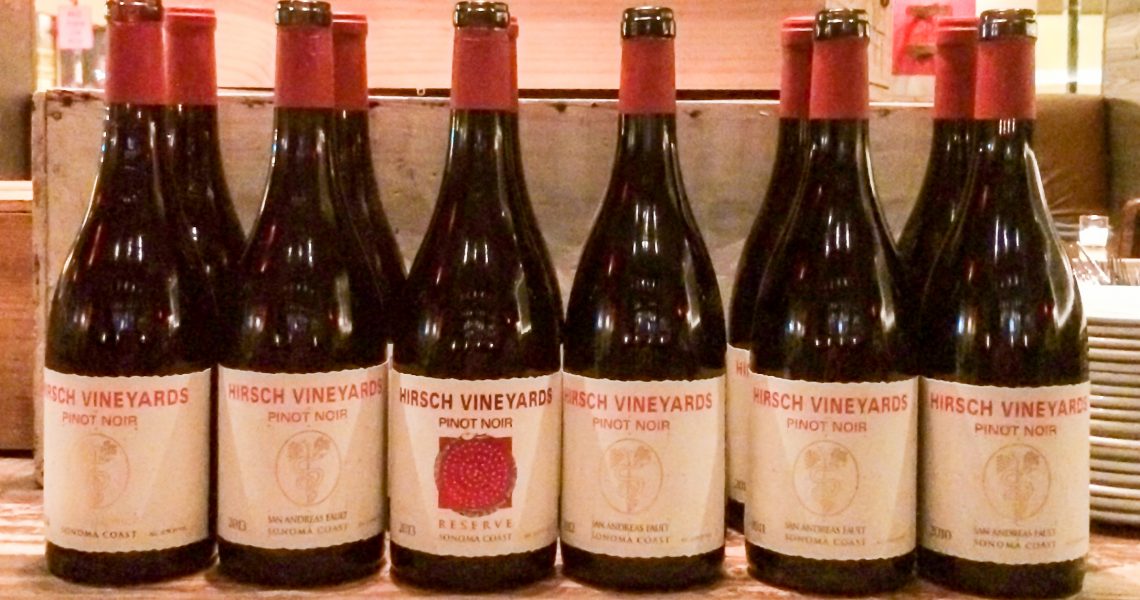 Jasmine Hirsch is, these days, probably better known as the co-provocateur (provocateuse?) behind In Pursuit of Balance, but with that flashy (if sometimes haphazardly defined) project shuttered, she’s free to return to her other full-time job as the face and voice of her family’s eponymous Sonoma winery.

The cringe-inducing whining about IPoB was often as overblown as the wines against which it sought contrast (and even “against” is more antagonistic than the reality), but Hirsch’s basic message hasn’t changed at all: ripeness can obscure difference, intervention can obscure difference, even intent can obscure difference. Obviously her argument is more nuanced than that, but the core of the philosophy is to make wines of response or revelation rather than wines of intention…which is why there was always a certain irony surrounding the word “pursuit” in IPoB’s name.

By “intent” I mean something other than the basic desire to turn grapes into salable wine. Not even the most hardcore naturalistas operate from a position of utter indifference to material or process. Hirsch has selected its preferred grapes, its preferred clonal material, the sites on which its vines grow. It most certainly practices viticulture of intent, and harvest dates aren’t selected at random. A sufficiently problematic fermentation would likely be dealt with, one way or another. But on a continuum from industrial to natural, wines of intent invite — in fact, demand — a lot more meddling than is evident here.

“Revelation” is an equally tricky word, in that it usually bears a promissory burden. That’s not how I’m using it here. I mean only that a wine of revelation is one that differs from vintage to vintage in response to its natural inputs — weather, mostly, but also less welcome participants like pests and diseases — and the oenological decisions such inputs encourage. Big house non-vintage Champagne is the ultimate wine of intent, requiring dramatic interventions all through the process, up to and including blending to achieve the house style. Wines of revelation aren’t the total antithesis of such machinations, but they’re a lot closer to the other end of the spectrum.

That said, it’s impossible to entirely disentangle intent from the drinkable results; Hirsch probably couldn’t make the style they obviously prefer were their vineyards in Paso Robles. Also, the notes below are for blended wines, not terroir wines (except in a general regional or communal sense). Still, the wines themselves can’t help but reveal the truth or lie in the claimed philosophy; if they hold fast to an identity, year after year, they’re wines of intent. If they waver in response to season and the resulting variabilities in vine/grape chemistry, they’re wines of revelation.

Hirsch’s are clearly the latter.

Hirsch 2010 Pinot Noir “San Andreas Fault” (Sonoma Coast) — Just enough nervous energy to battle back a dense, earthen minerality. Otherwise, this feels like some sort of savory beet slurry in the hands of a creative chef; surprisingly heavy without being concentrated, tannin and acid simultaneous apparent and unintegrated. A second bottle introduces pine resin and green grass to the finish. Many of these signs point to an awkward stage rather than some fundamental flaw, but I also worry this wine will forever be accompanied by its struggle to regain coherence. I like everything here, yet this ends up being my least favorite wine of the tasting, because my affection for the materials isn’t retained by the finished product. (12/16)

Hirsch 2012 Pinot Noir “San Andreas Fault” (Sonoma Coast) — Dense layers of tannin, dark fruit with a hint of black pepper, and a slight astringency. Very, very long. The more air it gets, the more it closes in on itself. One fellow taster remarks that he’d like to drink this now; I can’t think of anything I’d rather drink less from this lineup right now. After a decade or more, though? Count me in. This is in desperate need of time. (12/16)

(Hirsch amusingly characterized the reaction of customers, when faced with the burly 2012 after the slender 2011, as, “what the fuck did you guys do?”)

Leave a Reply to David B Cancel reply