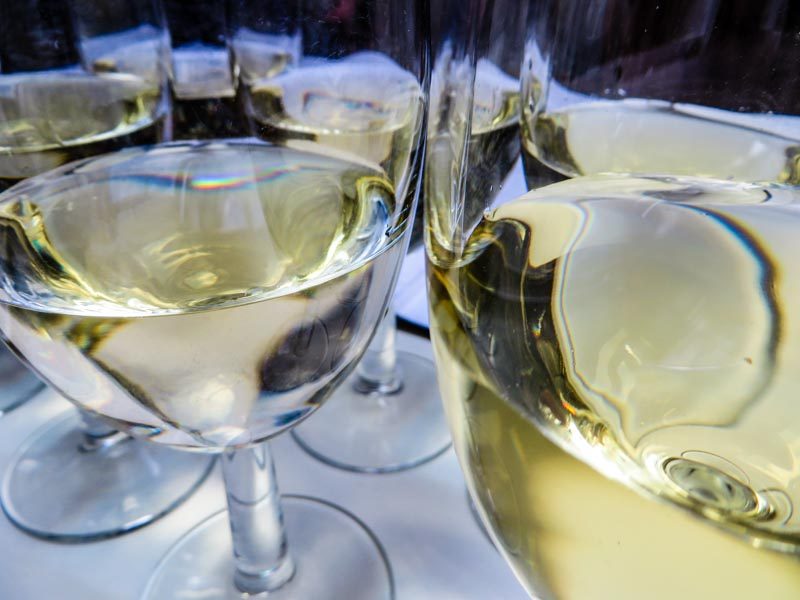 Wine is getting whiter. The ascendance of white wine as not only the most logical, but the default accompaniment to dining at any level is all but complete.

Sure, there are always exceptions. Some of them are establishment- or cuisine-specific, some of them are national or regional, and of course there are individual holdouts who find the thought of drinking anything they can see through utterly inconceivable. But in defiance of seasonality, and whether amidst gilded formality or tchotchke-littered casualness, wine consumed in quantity (that is, by the bottle) increasingly tends to be white. The reason: it makes a whole lot more sense as an accompaniment to the food.

This inversion of the traditional norm didn’t happen overnight, and a fair number of factors contributed to the change. The gradual lightening of modern cuisine played a major role, as did a greater focus on more-sustainable plants (as opposed to less-sustainable land animals). So did an under-appreciated contributor: restaurants’ attempts to limit ingredient costs, and thus prices, as those costs spiral even as many consumers’ belts tighten.

Think about the full tasting menu at a modern high-end restaurant…the kind that takes hours and a dozen flatware swaps to finish. How does it flow, these days? There will be various small bites, after which some form of raw fish is inevitable. Bivalves and/or shellfish are a common element. There will be liberal use of vegetables, many of which will tend towards green, as coconspirators or featured players. Soups still cling to richness, especially in the correct seasons, but the serving vessels are smaller than they used to be; consider, of late, how many shot glasses (versus bowls) carry drinkable comestibles. Then comes cooked fish, often brightened by a acid-driven preparation. Then, finally, an intense but portion-controlled meat course, after which it’s time for a parade of desserts and postprandial sweets.

Where, in that meal, is a role for a full bottle of red? There isn’t one, except in a crowd large enough to finish off that bottle in a single round of pours. Virtually everything demands white wine…and not a heavy white, either, but something crisp, lively, and vibrant. A glass of burly red with the beastflesh? Sure. But earlier in the meal, even the lightest red is setting one up for a host of unpleasant clashes. Ordering 750 ml of red in these circumstances is essentially a defiant statement of intransigence. Better red than dead…

It’s not just true in the luxurious stratosphere, either. Small-plates restaurants — the grazing-and-snacking hybrid that draws from tapas and izakaya traditions that has become the default global cuisine — may dally with intense wallops of offal or some ubiquitous pork belly, but leans much more heavily on provender that prefers a whiter shade of pale.

This trend was already well underway before I realized I had to confront it. I noticed that in restaurants where multiple bottles over the course of the meal were likely, the traditional white-then-red progression was increasingly unworkable. Either the red arrived too early and sat there, unloved and unconsumed, alongside poissons of disinterest; or it arrived so late that there was barely time to get it opened, tasted, and poured before petits fours and digestifs were on the way. (And who wants to drink high-quality red wine with dessert? Except for the chocolate-and-red-wine weirdos, who are just wrong, nobody.)

Eventually, my interactions with wine- or waitstaff required a preemptive prophylactic interrogation. “How many red-friendly courses are on this menu?” More often than not, the answer was firmly singular. And so, I’d order a white. If another bottle was required, it too was quite frequently white.

That said, it took wine lists themselves a while to catch up to the trend. Like one well-known Boston seafood chain that, for many long and inexplicable years, featured equal numbers of whites and big-ticket, structured reds, both the elevated and the casual clung to a traditional division of vinous labor that, if anything, tended to preference reds. And so it remained, long after it made any sense to construct lists that way.

These days, though: whether it be a steamy August or a biting January, a clear plurality of tables bear white wine in both bottle and glass, especially in cities with the best wine cultures. And finally, businesses are coming around. Not just by adjusting their hue ratios, but by broadening the very definition of “white.” Jura whites, whether ouillé or sous voile, are a lot more common. Traditional wines made in semi-oxidative styles (a hallmark, not always intentional or controlled, of the natural wine movement) abound. Orange wines (which, despite their structural oddity, are still made from white grapes) make the cut. Even persistently underutilized and under-appreciated sherry has been drafted by les blancs. All of this adds more variety and diversity of palate weight to a white palette that was previously divided into “crisp, high acid, unoaked” and “oaky chardonnay from everywhere” at all but the most adventurous establishments.

So where does that leave reds? Adapting. Rosé has become awfully popular; in some cities, it’s so tightly allocated that restaurateurs have to bicker over a few bottles. (Salespeople of ten or fifteen years ago would likely perish from laughter at the very notion.) Lighter, fresher, more “white”-like reds are vastly more common than they used to be, and even places better known for more brutish reds — California, Australia, Spain, Sicily — have found ways to adapt to the market, whether through geography or technique.

And what of the stately, wizened Gentlemen of the Grape who used to dominate both chair and decanter? Well, that’s a difficult future to predict. The problem isn’t unrecognized quality; people who’ve tasted them know these wines are great, even if specific categories are now generally unaffordable to the masses, and usually enjoy them when offered. It’s more what’s described above: decreasing utility with what we eat. The rustic European stew, the simple roast…these exist and have an essential place at certain tables, but those tables tend to be in the home. In restaurants, the comforting dishes that used to embrace wines of this nature are — because the modern diner demands invention and diversion — increasingly transformed by untraditional or non-European influences.

For example: grilled steak is as red-friendly as any ingredient on the planet. But when it’s done in a Vietnamese vein; marinated in a blend of salty, herbal, acidic, sweet, and hot; then tarted up table-side by fresh limes, fried shallots, roasted peanuts, fiery Thai chiles, and green papaya? Both logic and experience demonstrate that one should reach for German riesling rather than cabernet sauvignon from Bordeaux, Napa, or anywhere else. Even savory, herbal, and acid-forward Loire cabernet franc struggles with this pairing.

The alternative is that one now studies the list and, upon achieving agreement, makes an affirmative choice to drink a red of heft or complexity (or both), ordering the accompanying dishes accordingly. In a sense, this relegates all but quaffable reds to the special-occasion, plan-around-it category that Champagne once dominated. There’s a certain irony in that, too, as Champagne and other top-quality sparkling wines are also ideally suited for the modern global cuisine; a notion sommeliers around the planet will enthusiastically support, even though high prices in the States make it difficult for some consumers to share that enthusiasm.

Still, lovers of the big and dark shouldn’t despair. The pendulum may eventually swing back. And it’s not as if reds have been entirely abandoned by modern drinkers and diners. That fate has been suffered by a different and (these days) almost quaintly archaic category: sweet wine. Which means, I suppose, that its hipster-driven revival is only a few years away…