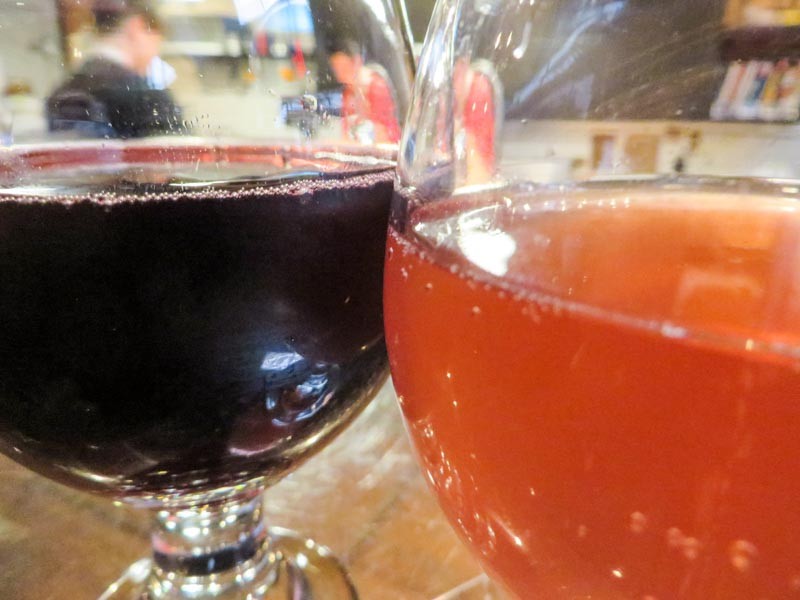 The “moment” arrived about ten years ago. Perhaps earlier? Memory’s forever bent by the convex lens of so very many wine glasses. Nor do I remember where, or who…though I have some guesses. I do remember what, though. It was Lini, and as expected it came in red…but it also came in pink, and white. The rosso was disruptive and I wasn’t yet prepared to understand it, the rosato was pleasant enough, but it was the bianco that grappled with my attention.

In theory, I’d known this. I’d read the texts, eyes flickering over the allowed expressions in the hilarious anarchy of Italy’s DOCs. Mostly, aside from a very small handful of internationally famous appellations with vaguely restrictive codes (regulations that would be impossible for any self-respecting Italian winemaker to ignore), the “laws” seemed to be the same everywhere. Make it white, pink, red, sparkling, dry, sweet, fortified, aromatized, or really whatever you feel like doing…

But still. “Lambrusco comes in white?”

I drank a lot of that white, over the next few years. As a by-the-glass pour it metastasized all over Boston, where I lived and wrote back then. Why not? It was delicious, and — perhaps more importantly, on the commercial side — it was inexpensive. I occasionally dabbled in the rosato. But the rosso…the rosso…

There lay the actual struggle, even though I didn’t realize it at the time.

The historical association — Lambrusco, sweet red nonsense, elderly aunt beverage, party quaff for people who won’t afford real wine, dismiss with extreme prejudice — lingers. But back then, it was the dominant mindset, at least Stateside. There were strident defenses, here and there on the coasts and from crank geniuses in the biz, and if — as Italians repeatedly insisted — one could just get a plate of charcuterie and a glass of the red, fizzy stuff in front of a person…

But no. Even I would not have invested in Lambrusco futures. No sane person would.

And then there was a moment.

And now? I bow to those who made the investment in defiance of sense. For the moment has become a movement.

Sweet Lambrusco still exists, and I’ve made peace with it. Unless industrial and insipid, it makes sense in the same way that red vermouth or Aperol fit a sensorial niche. And the rosatos — from the natural-leaning producers, these tend to be pet-nats — are snappy, razor-wire quaffs.

But it’s the dry (or dryish), biting reds that compel.

It’s Philadelphia Wine Week, the bulk of which isn’t really aimed at my off-kilter organoleptic demographic. But there are some fun “alternative track” events every year, and the week kicked off with pure magic: a Lambrusco shindig, with (mostly) catered rather than in-house food, at Kensington Quarters.

KQ is a butcher with a restaurant, and what makes it worthy is that it doesn’t lose sight of the constraints that implies. The emphasis is on ingredient quality — obviously, mostly carnivorous — and proper cooking. The extraneous is mostly left for others, and there’s nothing molecular or fusiony on this menu. They know what they do, they execute it well, and they price appropriately. What’s not to love?

Well, the wine list must be bad, right? After all, it’s Pennsylvania, with its odious state-controlled system. And yet…

It started out pretty good. But since Tim Kweeder took over, it’s magic.

Kweeds (as so many call him) is an introvert. As am I…which is why I know how much he’ll hate that I’m publicly labeling him an introvert. (Sorry, Tim.) But he’s an introvert in a role that demands extroversion, and I very well understand both the effort and the difficulty that implies. I’m pretty sure that I fall more naturally into extroversion than he does, and as a result I admire him even more, because being an on-the-floor wine advocate for mostly unfamiliar and often-cranky wines is not a job just anyone can do. He’s also fiercely dedicated to his vision, and here’s where it’s important to recognize that without him, the wine revolution that’s happening in otherwise benighted-by-law Philadelphia might not exist. Or at least, it would have been delayed for a fair bit.

That history is only of interest to locals, so let’s instead look at the present. The notion of throwing a Lambrusco-only event, during a week otherwise aimed at the mass market and on a rainy night in a neighborhood full of enthusiastic imbibers but decidedly not the wine nerds that might otherwise infest such eclectic ephemera, is ludicrous. And yet…

To say that “he killed it” is both true and to resort to vernacular glibness. And yet, it was packed beyond the restaurant’s resources to handle such a glut, though they exerted a mighty effort and ultimately prevailed. But — and I remind, Pennsylvania is a state-controlled system through which wines of character or uniqueness cannot easily be dragged without soul-destroying effort — here’s the list of wines on offer:

…and that’s pretty cool, no?

I’m not going to offer individual notes, because it wasn’t that sort of event. A few notions, then:

My favorite? Without question, the Bini Lambrusco dell’Emilia “Fuso 21”.

Why? Because I’ve realized that what I want out of Lambrusco is a middle-finger bitterness that places the wine not aside easy-drinking cousins like brachetto d’Acqui, but firmly in the company of red vermouth, of Campari, of the easier-drinking versions of amaro. The acid’s always there, as is the refreshing fizz, but it’s the flash of tannic anger that ignites my interest.

I don’t often feel that the cocktail resurgence informs wine trends. Rather, I tend to view the former as eroding the latter, for reasons well worth elaborating (elsewhere). Beer, too. Most certainly beer and the hop fetish. But here, I think, is a rare occasion wherein there’s synchronicity. A time when the populist embrace of the bitter and the sour benefits a wine that has lived too long not in the shadows, but in the unforgiving glare of industrial big box glop. A wine that has a long-deserved market finally ready for its quirkily essential individuality.

And so, the moment?