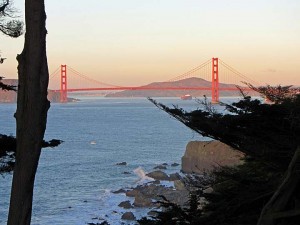 Perbacco – A restaurant that feels a lot more mass-market and corporate than the food it serves, Perbacco is located where few would think quality Italian food would be on offer. And to be fair, it’s no La Ciccia. But neither is it some North Beach tourist trap. A menu of Italian classics is actually a menu of Italian classics, not the more common Italian-American alternatives, differentiated from the old world mostly via portion size; this isn’t a restaurant at which to arrive in a state of presatiation. The cooking’s good, mostly, though it lacks refinement.

The wine list, too, is long on the classics (and perhaps as a result, a little short on the adventure), but other than a bit of din I can’t find much to complain about.

Alessandria 2004 Barolo Monvigliero (Piedmont) – Let me preface this note by saying that at the time I drink this wine, I’m in the early stages of what will eventually be a three-week misery of sickness, the worst I’ve experience since I was swaddled. So there’s every reason to suspect that my palate is not 100%, or at least of which 100% it might be capable. I mention this because I struggle to find aromatic interest in this wine, which is never a welcome absence in a nebbiolo. The structure, while certainly dominant, isn’t as forbidding as it could be. And there’s a lot of density to the wine. But other qualities…I’m just not seeing them. (11/11)

Chave 1994 Hermitage (Rhône) – At one time I owned some of this, back in the days when it was (relatively) reasonably priced. I don’t know what happened to mine, and I certainly drank it too early, because this bottle is where you’d want it…perhaps even a touch past that point…with a grittier, tooth-baring edge to its columnar masculinity. (Sometimes, a masculine column is just a masculine column. Or Chave Hermitage. Same thing.) (11/11)