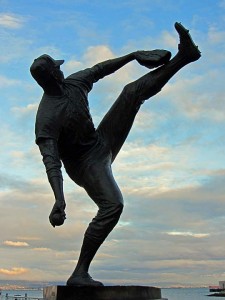 Bar Tartine – When I lived in Boston, I often complained about the dining scene (or more precisely, the eating scene). “But…don’t,” confused interlocutors would object, “we have great ingredients and talented chefs?” Unquestionably yes to the first, especially piscatorial, and a more tentative “a few” to the second. But what Boston always lacked was a vibrant midrange. Fine dining was more or less as fine as anywhere not an American fine-dining mecca (thus excluding Chicago and New York, for example), but the possibilities for inexpensive yet adventurous and high-quality eating were few-to-nonexistent.

I think of Bar Tartine (San Francisco is a city rife with exactly the sort of establishment I mean) as an exemplar of the form. From what I can tell they go through chefs like other kitchens go through towels (that may be a mistaken impression), but as long as the food’s good, who really cares? There’s a non-Western European tinge to the current menu, which is a delicious diversion from the norm, and while the food retains its primary quality of “good stuff cooked well,” there’s just enough that’s unfamiliar and fun to make this a destination worth returning to again and again, just to see what’s up. The wine list is good, too.

Broc Cellars 2009 Roussanne (El Dorado) – Tastes natural, but not Natural…by which I mean it tastes like an authentic attempt to express roussanne (I’ve not had sufficient El Dorado County roussanne to speak to terroir-expression) without the trappings of biological spoilage or cultish ephemerae, but with one foot in the orange wine camp. But anyway: stone fruit, adhesive and dense, with a mysterious sense of space illuminated in ultraviolet. And then, tannic. Let’s not leave out the macerative component, perhaps not (strictly speaking) roussanne-as-roussanne, but which in this case provides more of a contrapuntal complexity than a true rethinking. (11/11)

La Crotta di Vegneron 2007 Vin d’Ardèche Gamay (Rhône) – Brittle gamay, not fully “ripe” in that the fruit lacks flesh, but with its own appeal as a result. Tinny, perhaps, or put more charitably: high-toned without being overly volatile, and crisp. Lengthily crisp. Crisply long. Whichever. (11/11)