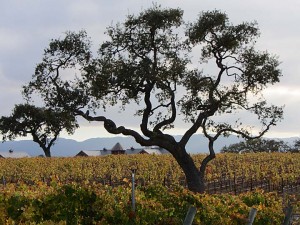 Tastes of the Valleys – Most of the wine bars along Solvang’s main drag are rollicking in what otherwise appears to be a slow time of year, spitting out wandering clots of weaving wine tourists to – one hopes – the safety of hotel rooms rather than automobiles. But this one, a cozy basement with a few tables and a short bar, is empty when I arrive. Just me and the proprietress.

I’m here because this particular bar is specifically noted as a place to taste Arcadian and Au Bon Climat wines, which aren’t the easiest to find opened elsewhere in the area. Only the latter is actually available amongst today’s selections, but after a long day of tasting and with plenty of pinot in my post-sunset future, it doesn’t really matter.

Au Bon Climat 2007 Pinot Noir Los Alamos (Santa Maria Valley) – There is a particular quality of pinot noir that, in New Zealand, I’ve used – with some success – to guess at Central Otago (specifically Bannockburn/Cromwell) sourcing: blood orange, plum, and beet. But it occasionally shows up elsewhere, there and abroad, and here’s an example. If I hadn’t seen the label, I’d probably once again guess Central Otago, except that there’s a little more sophistication and delineation to the fruit (a consequence, perhaps, of New Zealand’s generally young vines and still-limited clonal palette). It’s really quite a gorgeous wine, overall, and as it finishes a graphite-like minerality…very unusual in pinot noir…starts to rear its particulate head. This is still very young, and yet there are already mature-tasting elements within, so as to its actual future prospects I wouldn’t dare venture a guess. (11/11)

Babcock 2009 Pinot Noir “Rita’s Earth” (Santa Rita Hills) – 13.6%, but tastes much, much bigger…a good lesson in how fruit intensity and extractive winemaking can fool the palate into thinking that excess body is alcohol-derived (which, to be sure, it often is). Purple, black, swollen…this is like drinking a bruise. (11/11) 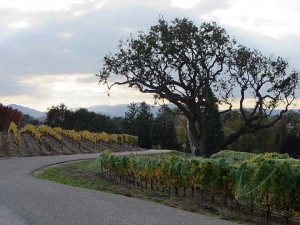 Hitching Post II – I have no idea what things were like in the immediate post-Sideways era, and I’m sure the relentless waves of tourists have made it difficult to retain a true neighborhood feel here, but the reputation of this restaurant as a place where locals do indeed still go is merited. I recognize a few winemakers here and there, though I suppose the biggest celebrity is the one who enters just in front of me, patiently awaiting his usual table: David Crosby. Nice to see he’s putting his new liver through its paces.

The food? No misteak. (Sorry.) Really, though: it’s beef or bust for the most part, though on my night they do some nice things with chanterelles and artichokes (not together). Basically, if it can be done in a single pan or over a fire, it’s probably worth ordering; otherwise, exercise caution. As for the steak on which one facestuffs here, it’s cooked with confidence and skill exactly as I’d have wished it. I could, I suppose, quibble with prices that seem a bit lavish, but then again it is a steakhouse, and is also as much a site on the tourist map as an actual restaurant these days. Best, I think, to just assume that the premium is for the experience rather than just the food.

And as for the experience…my waitress is worth any premium they wish to charge. For every quip she has a comeback, for every challenge a hilarious, smart-assed reply that would split my sides had the giant piles of meat not already accomplished same. Stories of tossing drunks in the back of her pickup abound. I’d have been pleased with the meal in any case, but she’s responsible for its elevation to pure joy.

Hartley Ostini “Hitching Post” 2008 Pinot Noir “Hometown” (Santa Barbara County) – Squared-off, blocky pinot noir in a varietal straightjacket. That’s neither criticism nor praise, exactly, but this wine tastes like someone averaged out all the pinot noir from “here,” left out most of the adjustments and/or trappings, and just presented the results as wine. (11/11)

Hartley Ostini “Hitching Post” 2001 Pinot Noir Julia’s (Santa Maria Valley) – Dusty morels and more intense, freshly-plucked porcini bind with pie fruit (that is to say: there’s an oven-warmed quality to it). This is fully knit and, I’d say, fully mature, even though I don’t expect it to fall apart immediately. A lack of full expression is, I think, inherent to the wine rather than to any artifact of age or storage; while I welcome the fact that the wine wasn’t pushed towards the caricature that afflicts so many of its neighbors, it also tastes as if it wasn’t pushed to the fullest expression of its own inherency, which is something I’d identify as somewhat of a house style at Hartley Ostini. In a way it’s a good thing, considering the alternatives, but one could also wish for just a bit more. (11/11)

Hartley Ostini “Hitching Post” 2006 Pinot Noir Bien Nacido (Santa Maria Valley) – Bruising. Only a vague sense of restraint (or fear) separates this from the punishing perils of Pinot Port. The alcohol isn’t too unrestrained given the overall burl of the wine, but the fruit is dark and somewhat gelatinous, the structure an almost cartoonish 100-pound falling weight, and the body the kind one fears is only achievable via the sort of secretive modern science for which athletes must pee in cups. Not that I think that’s what they’ve done here. But I do think this is a wine for people who usually find Hartley Ostini pinots overly transparent, and I am not one of those people. (11/11)

Disclaimer: the last wine is an off-menu selection offered by the hostess and poured by the glass for the entire table, but for which we are not charged.