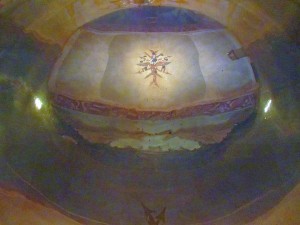 Petros – Silence. Dark, anything-but-decrepit silence. Such a change from the Lazy Ox…

I’d assumed that lunch in the midst of heavy-duty wine tasting would be some sort of California cuisine accompanied by a glass or two of local wine. I didn’t expect ambitious Greek food in an elegant setting. And I certainly didn’t expect to be dining in what I now find, poking about the internet, is a Fess Parker establishment. Will I ever live it down?

But what’s more baffling is the utter lack of patronage. I mean, sure, it’s neither cheap, quick, nor casual, and I suspect all three are what many wine country tourists are after. But there is only one other table occupied during my lunch, and its occupants…well, let’s just say that as they sit in utter silence, gnawing the decaying threads of a meal, it’s possible that after ninety-plus years (each) they’ve run out of things to say.

I hope, at least, that they enjoyed lunch. Because the food here is really very good. Greek cuisine has not, as a rule, scaled well in the…pardon me…pantheon of borrowed European cuisines. It does not take to fancifying or airs, and while I don’t know if that’s the fault of the practitioners or the cuisine itself, I rather suspect the bulk of the blame lies with the source material. As with certain regional Italian cuisines (though not all of them), Greek dishes really seem to prefer to be left to their own relatively simple devices. At which point the entirety of one’s success with the cuisine comes down to shopping and basic cooking techniques. Both are done well here.

I’ve no complaints about the service either, though I suppose it’s not hard to manage a nearly-empty dining room. As for the wine list, it’s neatly balanced between the local and the non-formulaic Grecian. Someone has put some work into this list, some curation to help ease these unfamiliar wines onto diners’ tables. Of course, I can’t quite resist either temptation…

Monemvasia 2009 Peloponnese Moschofilero (Greece) – Light and insubstantial, offering a wan gesture in the direction of flowers and white sand. Is this a contextual effect from drinking it amidst a bevy of blowsy California wines? Perhaps in part, but there’s still just not much to it. (11/11)