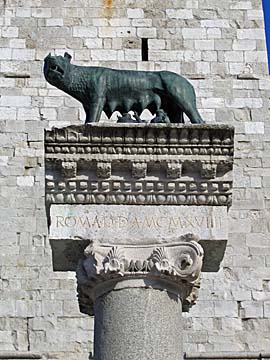 A few weeks ago, the oenokerfuffle of online story and song was the Olivier Cousin debacle, and it had most of the naturalista wine world talking about it. I read along with a good deal of sympathy for Monsieur Cousin, but a fair bit of dismay at the tenor of the post-hoc debate.

In brief: Cousin, an iconoclast in the purest sense of the word, makes wines that don’t receive the officially-designated appellations they’d otherwise warrant. This is, more or less, by design. What he does, instead, is use various semi-confrontational means to indicate place of origin that run afoul of the humorless French and local wine bureaucrats. In response, they’ve decided to punish him for doing so, and the punishment is almost parodically severe: the freezing of his bank accounts, making it virtually impossible for him to continue to do his work, and the threat (a very real one) of jail time.

They take their bureaucracy seriously in France.

That the punishment is grossly disproportionate to the crime should go without saying. Cousin knows he is deliberately flouting the rules, yes, and a sensible response would be to force him to stop doing so by less abusive means (e.g. “do what we say or you can’t sell your wines in France”), not putting him out of business or behind bars. One hopes something similar will be the actual resolution, and that said resolution will come speedily enough that his livelihood will not suffer irreparable damage. There are, or were, even petitions (French and English) to assist in convincing the French authorities to come to their senses.

That’s all clear. What’s less clear is the path forward, once the current unpleasantness is behind us. Since Cousin is a darling of, and primarily known among, the natural wine set, most of the proposals were fairly predictable, and more or less amounted to “blow up the INAO” (not literally), or at least “do away with the appellation system.” I think this is woefully misguided. But I think the core problem is that the appellation system itself is woefully misguided. Or at least, woefully misapplied and mischaracterized.

I’ve written about this before, but all the problems stem from a division of opinion as to what a legally codified appellation system represents. At the legalistic level (at least as practiced in Old World wine regions), it’s a guarantee of geographical origin, ingredients, and practices in attempt to codify and highlight both terroir and tradition. Certain of these categories are more or less important depending on the appellation under discussion, but they form the foundation of the idea behind associating place, product, and name within the confines of the law.

It’s my belief that this remains a worthwhile structure. The customer can only benefit from a system by which information is communicated via labeling, and that’s what a properly constructed appellation system does. Yes, there’s a certain threshold of knowledge required to make good use thereof, but that’s true for any labeling nomenclature. Nonetheless, knowing the ways in which a Sancerre is different from an Hermitage, or a Roquefort from an Osseau-Iraty, is essential to knowing how and when to utilize those ingredients at the table or in the kitchen.

Of course, this is not what the appellation system represents to any number of entities. To many consumers, it represents some sort of promise of replicability (like a fast-food sandwich) and, inevitably, price point (which is why the very best Muscadet can’t sell for more than a wretched premier cru white Burgundy, even though this state of affairs is ludicrous). To critics, it represents a nebulously subjective paradigm to which aspirants must adhere or be judged as lacking. To some winemakers, especially the industrial ones who represent both the majority and the scourge of any appellation, it is a tool with which to secure their market advantage at the expense of those who would expose their mediocrity. And to bureaucrats, it has somehow come to suggest not just identity, but quality and the attempt to legislate a definition thereof.

All of these external expectations are damaging in one way or another, but it’s the last that’s the source of this particular controversy. The argument goes like this: the granting of a defined appellation (the top of the legalistic heap, in terms of officially-sanctioned labels) is a promise to the consumer that the wine will meet certain expectations, some of them qualitative. As such, we cannot allow wines that do not meet certain qualitative criteria to receive the appellation, for by doing so we would devalue the worth of the appellation system.

And so does a system become self-sustaining and self-justifying for all the wrong reasons. For who decides on those “certain qualitative criteria?” Usually, the majority faction of a given appellation’s producers. And who are they? Of course: the cooperatives and the industrialists. At a stroke of the legal pen, the deck is stacked against anyone who would, via the quality of their product, demonstrate the widespread mediocrity deemed to be representative and thus “typical” of the appellation. And given this system, iconoclasts know they don’t have even a glimmer of hope…which is why so many opt out before they’re forced out.

But the rot goes deeper than externalities. For the worst possible purpose of the appellation system is self-preservation, a recursive and thumb-sucking whirlpool of bureaucratic onanism. And yet, this is what it has devolved to. Like so many other bureaucracies, its interests have all slowly but inexorably become self-interests. But haven’t I previously argued that the appellation is a good thing, at least in theory? Yes, I have. Properly-applied, it’s incredibly valuable.

In France – this is less true elsewhere – the obsession with the qualitative baggage of the appellation has created a system in which working outside it is immediately and often fatally damaging to one’s bottom line. But even in the absence of such rigidity, those who choose to follow their own muse are disadvantaged at every turn; a Sancerre will always sell to more people, more reliably and for more money, than a vin de table, and this is true despite whatever cult fandom may have developed around the latter. Only a high-profile critic’s point-laden and hyperbolic approval can change this…and outside the internationalized, Latin-named super-whatevers in Italy, this is something that can talked about only in theory, not in practice. Outliers must succeed on marketing alone, yet their avenues for doing so are deliberately curtailed by their own governments and neighbors. This is profoundly unfair.

Qualitative leaders within an appellation must be protected from the mediocracy. The very last thing that should be allowed is producers voting on whether or not other producers with whom they are in direct competition are “typical” or not. Give this job to an external authority…say, panels of wine professionals tasting single-blind and within the narrowest possible peer groups…without the built-in financial incentive to act dishonestly. This will never be a perfect solution – no human judgment can be – but it will be less foundationally compromised than the current system.

Remove the barriers to commercial success that exist for those working outside the appellation codes. This requires more than fiddling with the law or label nomenclature. Wholesale and official enthusiasm must be accorded to the idea that such products are not definitionally better or worse, but merely different, than their in-appellation counterparts. The mindset must be created that both an appellation-endowed wine and a table wine from the same site are both authentic representatives of that place. This won’t happen overnight, but the foundation can be laid.

If this doesn’t happen, the appellation system really will fall into irrelevancy, as it is already in danger of doing in so many places. Both iconoclasts and top producers will flee the system, rendering it not only far from the qualitative guarantor that it has mistakenly been asked to be but a vastly diminished reservoir for conservatism and mediocrity. And thus, a useful tool for the consumer will disappear.