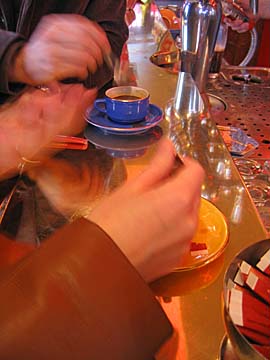 French coffee sucks. Yes, I said it. I’ll pause here to let the vituperation and recrimination come to a boil…

(OK, everyone down to a simmering seethe by now? Let’s proceed.)

No, it’s not all bad. But it’s pretty bad nonetheless. The difficulty of finding a good tasse de Joseph in your average French café or restaurant has escalated beyond all reasonable imagining. This in a country that is, ostensibly, known absolutely everywhere for its café culture. The culture is just fine. It’s finding something to drink that’s the problem.

How did this happen? There’s a lot to it, but since this isn’t a coffee blog I’ll stick to the notes de Cliff: Robusta beans, bad temperature/pressure control, indifferent roasts, an obsession with the crema in lieu of the actual taste of the brew…those, and more, are the procedural reasons. But they’re not the reasons that matter.

What does? That the French like it, or at least have come to accept it, this way. Many whose backs were immediately up at the opening sentence of this essay felt that posterior elevation because, for them, French coffee most decidedly does not suck. And it probably wouldn’t matter to them if every other coffee-obsessed country in the world, or at least every self- and otherwise-appointed coffee expert, suggested otherwise

There’s more to this than the inherent subjectivity of taste. There’s a reason that one country’s coffee preferences might drift one way, while another’s will stand firm or drift in the opposite direction. And it’s that taste, while remaining subjective and contextually mutable, can be steered by external influences. Marketing works, after all. So do cultural nudges (witness the sales trajectories of domestic pinot noir vs. merlot post-Sideways). But easier and more likely than both is the organoleptic symbiosis between cause and effect. In other words: that which exists creates taste, and taste in turn creates what satisfies that taste. It’s a reflexive system.

(Reminding myself that this still isn’t a coffee blog, and since in no way do I want to wade into the syrupy philosophical murk of aesthetics – because I’m far from qualified, and if I was we’d be here all day – it’s probably time to turn this into a post about wine.)

That there are national (and regional, and local, and cultural) palates is patently obvious to anyone who sells wine to consumers. Oh, some people still object to this – no one wants to be stereotyped – but there’s a reason that wine lists in, say, Boston are very thin on West Coast wines when compared to West Coast markets, and it’s not because West Coast wines simply aren’t available to Bostonians. Again, it’s the aforementioned symbiotic relationship: tastes in Boston are more Europhile because residential origins in Boston are largely European (and Boston is, in general, a Europhilic city), a market to satisfy those tastes is thus created by how Bostonians spend their money, and that market in turn reinforces the Europhilic bent of Boston’s oenogeeks, because those are the wines that are more available than others. It’s the feedback loop of taste and consumption.

Bring an elegant, Old World-styled California syrah to a group of committed winos in France, and they will very frequently complain of excess size and alcohol, even if the wine is lauded for the lack thereof on U.S. shores. This sort of thing is only a surprise to those who don’t travel much, those who don’t drink far afield from their preferred styles, or those who believe that there are objective qualitative measures for wine (such True Believers are, alas, well-represented among the besotted rank and file). It’s just preference…the personal and cultural forms thereof intermingled…and the two can’t be as easily separated as some (many of them professional critics and winemakers with a commercial interest in insisting otherwise) would have you believe.

My cellar is populated by wines I prefer. My home coffee drinking is a daily encomium to my own preferences. And what I say about coffee, or wine, outside those preferences is inevitably colored not only by my own desires, but by the cultural milieu in which those preferences were birthed and educated. What I or anyone else writes about wine…or coffee…must be understood with that context. “In my opinion” is always the invisible coda, whether one agrees with that opinion or not.

This is, I think, an understanding that has devolved in recent years. Historically, professional criticism was accorded a sort of elevation; authority was more or less assumed, and respect paid to that authority. Without getting into whether or not this supposition of authority and concomitant respect were warranted or even wise, both have changed in this era of communal judgment, social media, and crowd-sourced opinion-mongering. Robert Parker can lose market share not just to Allen Meadows, but also to CellarTracker. Respect…or even the need…for a capital-C Critic issuing judgment has probably never been at a lower ebb. Again, we can debate whether this is an improved state of affairs or not, but it’s hard to deny that it’s our modern reality.

Despite this sea-change, culture – or more precisely, environment – still weaves its symbiotic web with taste. Communities of opinion form from communities of taste, as anyone surveying the various web fora on which wine is discussed soon recognizes, and those communities of opinion return the favor by (as described above) influencing the tastes of their assembled. But as more and more communication is conducted primarily within such communities, the increasingly unspoken assumption of shared values becomes a sort of rhetorical calcification, because those values are never challenged. Opinion can easily slip into orthodoxy.

This explains a lot of the tension one sees between different “camps” of wine lovers. It’s not just that tastes differ, it’s that when one spends most of their time drinking (and thinking) within a largely frictionless environment, actual friction is more than a bit of a shock. Disagreements and debates within a shared-value community tend to be about minutiae, not foundational assumptions. Encountering the words of someone with a different foundation can be more than jarring. Indignation is a common response, anger a frequent resort. More often than not, what’s questioned is not the opinion itself, but the very existence of the opinion…in other words, the “right” of its holder to express same. This is a profound misunderstanding of what criticism – professional or amateur – is, I might add. I often borrow the trope that everyone does not have the right to opinion, only an informed opinion, but the reality is that an opinion does not become any less subjective no matter how well-informed its monger.

This personalization of debate…a resort to ad hominem rather than concession of good intent…is an unfortunate consequence of the factionalization of taste, because we miss opportunities to learn from those with contrary views. But there’s another danger: the previously-described symbiotic relationship between consumer and product leads to this disruption in dialogue being reflected in the products themselves, and even those who make them. Indeed, there are clearly identifiable “camps” of winemakers these days, volleying accusations of cynicism, greed, scientific illiteracy, philosophical hogwash, and bad taste at each other. In what way does this help anyone actually attempting to understand the often-bewildering world of wine? It’s as if everyone much first choose a side, after which they will receive a customized set of answers to their questions. This is unproductive.

One of the easiest ways to identify the nefarious presence of this sort of epistemological closure is to look for short, sharp declarations that, on further examination, are actually no more than opinion wearing the frippery of authority. Like, for example, the opening sentence of this post. Does French coffee actually “suck”? I’ll reiterate that, to me, much of it does. But that’s a claim, not a proof. To many, many French people who drink and enjoy it day after day, it is very probable that it does not (or if it does, they’ve a much greater tolerance for masochism than I’d realized).

The problem, of course, is that aggressive brevity reads better. It’s much more suited to our current forms of media. It “sells copy,” to borrow an increasingly archaic term. And that, too, is why I led this post with an example of same. If I stuck all the properly-understood caveats about subjectivity and such in the opening sentence, immediately allowing for the validity of all potential counter-arguments, no one would finish the paragraph. It would be unreadable. Perhaps worse, it would be boring. This is why no one does it.

And so, the burden is on us – the readers – to mentally assume those caveats alongside any and all expressions of opinion. We should, I think, assume foundation and good faith even from those whose opinions seem shockingly misguided, unless their arguments demonstrate otherwise. Having done so, we can move on to a dialogue not about the validity of an opinion, nor the curriculum vitae of its author, but the reasons for and expression of that opinion. We can agree, disagree, or concede to a blend thereof. We can start to disassemble the impenetrable walls we’ve built…walls that we’ve come to believe describe our taste, but in fact only imprison it. And maybe we can do so over a cup of coffee or two.