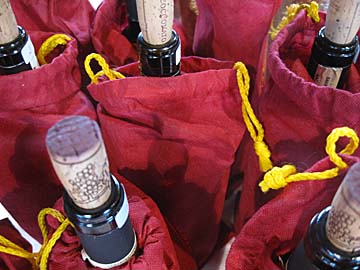 Outside, all is grey or white and soft. The snow falls, and it’s gentle, but it’s also persistent. It’s the kind of snow that will be with us for a time. It blankets the city of Nizza Monferrato with silence, muting the usual urban din but also suppressing the local urge to roam. Why not stay inside where it’s quiet, and enjoy the peaceful monochromic recasting outside the window? It’s going to be a beautiful afternoon and evening.

As for our little barbera band, reassembled in a bright, open space that seems to be nearly all windows, there’s a chance to do this. For a time. We listen to another lecture, this time on the meaning and intentions of the newly-designated Nizza subzone and its producers, while yet another tasting is assembled. To be honest, the information flow is a little dry, and largely the sort of procedural and rote stuff that wine writers have heard dozens, if not hundreds, of times. Besides, it’s so nice out. Can’t we go have some fun in the snow?

Oh, but we only need wait. If it’s cooling outside, it’s heating up inside. And it’s about to explode.

In the meantime, there’s a tasting to get through. It’s true that many of us find visiting producers a more interesting use of our time, but the organizers undoubtedly find what we’re doing now a more valuable use of our time. And hey, it’s their show, their dog, and their pony.

While we might not be overly enthused about another procession of foil-wrapped bottles, it must be admitted that this one is admirably focused: all 2006, all barbera d’Asti, and all from the subzone of Nizza. Some of these wines are new, some we’ve had in a different vintage, and some are repeats from this morning’s Nizza tasting. This is, at least, purposeful blind tasting, which our forays thus far have not always been.

What might not be apparent to our hosts and the producers (who are represented in near-entirety), however, is that there are two concurrent purposes being pursued here. One is theirs: to demonstrate the character, style, and (dare it be mentioned?) terroir of Nizza. But the other is ours: to attempt to judge whether or not that purpose is being achieved. Does Nizza have an identity? A meaning beyond the simple marketing trick of differentiation?

We’re about to find out. Maybe.

Bava 2006 Barbera d’Asti Superiore Nizza “Piano Alto” (Piedmont) – Garbage, stewed weeds, and sour acidity. Those of a younger bent might opine that this “tastes like ass.” I’m not sure I can get away with such phraseology, but they wouldn’t be wrong.

Isolabella della Croce 2006 Barbera d’Asti Superiore Nizza “Augusta” (Piedmont) – Supple. Solid purple fruit, but it’s all up front. New World in style, and good in that idiom for a few moments, but the finish is nowhere, and what’s left in the glass is much more akin to Chartreuse than it is barbera.

La Barbatella 2006 Barbera d’Asti Superiore Nizza La Vigna dell’Angelo (Piedmont) – Flat. There are a few mineral-enhanced soil notes, but otherwise this wine is dead. Dead nose. Dead palate. Dead finish. A shame. I don’t even think I can make the funeral. I never knew the wine that well.

Gazzi 2006 Barbera d’Asti Superiore Nizza Prajot (Piedmont) – Stale paper. Horrid. (Post-facto edit: I have reason to believe that something may have been wrong with this bottle.)

La Gironda 2006 Barbera d’Asti Superiore Nizza “Le Nicchie” (Piedmont) – Soupy fruit circling a black hole. In other words, not only is the center of this wine void, but that void is sucking everything else into it into nothingness.

Olim Bauda 2006 Barbera d’Asti Superiore Nizza (Piedmont) – Very sweet strawberry jam, but then taking a detour through a tar-producers’ convention hall. That’s both an aromatic and structural comment. Fruit Roll-Ups™, big and structured, but lacking any sort of finish whatsoever. Ugly. This is like drinking ittle Miss Muffet after she’s been beat up by a gang of roving thugs and left for the spider to find her, bruised and sobbing, beside her tuffet.

Conclusions? One inevitable one is just how bad this sort of mass-production blind tasting is for both wine and taster. There were six wines that appeared in both the morning and afternoon tastings. Two of them have completely different notes, both organoleptically and qualitatively: the Gazzi, suggesting something wrong with the afternoon bottle, and the Guasti, which I hated in the morning session but was more receptive to in the afternoon, and didn’t describe as anything like the same wine. The other four match fairly well in qualitative assessment and less, but still forgivably, well along general organoleptic lines. One might think that two out of six isn’t bad, but of course that’s just over the wines common to the two tastings. If one extrapolates those results over the entirety of our blind/group tastings, that’s a lot of mistakes and inconsistencies. Too many. Whatever this says about a taster’s (or this taster’s) skill might be notable, but is really irrelevant in comparison to the level of unfairness with which a so-afflicted producer is burdened. 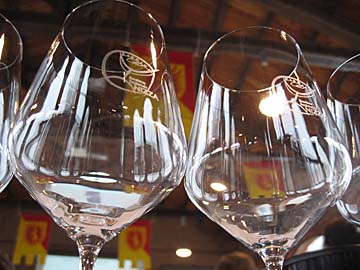 So how about Nizza and its signature characteristics? There’s absolutely no way to say, because the wines are too variable and, in so many cases, too tricked-up. I don’t mean actual fakery…because that’s an accusation I wouldn’t make without evidence…but modernizing, fruit-enhancing techniques in vineyard and cellar coupled with the increasingly nefarious influence of new wood. If they really want to showcase the Nizza terroir (if indeed it has one worth identifying), they’re going to need to show us the unoaked, “traditional” versions they seem to be hiding in their cellars as shameful, deformed cousins. Given this evidential set? Nizza means very close to nothing.

Of course, even if we can’t discern a terroir-based similarity, that’s not all an appellation can mean. Is there at least a typicity? No, decidedly not, outside a vague uptick in structure…though much of one structural element likely derives from the wood. How about a marketing advantage? Possibly, though of course it’s far too early to tell. The whole “d’Asti” designation is soon to be dropped on these wines, leaving just “Nizza” on the bottle; whether or not that will be a help remains to be seen, but certainly shortening label verbiage and simplifying wine identification is rarely a bad thing. (Are you listening, Germany?) Aside from the place name, there’s some tightening of standards: 100% barbera rather than Asti’s required 85%, for example. Excluding other, and especially international, grapes is at least a step in the right direction, if the goal is to produce something with an identifiable, individual character. And it’s still very early in the game. Ten years from now, such a tasting might provide a surprisingly uniformity of purpose. And maybe even terroir.

But really, the only arguments that can and will ever be made for this subzone are the wines themselves. And neither collectively nor qualitatively do they support the petition under consideration. I can’t go to the other extreme and call this a “vanity appellation” (even though Michele Chiarlo will say some things later that make me wonder), because there’s no way I can be in these producers’ heads. Still, this remains: if there’s an argument for Nizza, it hasn’t been made today…and any wines that are making the argument have been lost in the fog of techno-oenological war.

The order and outcome of that battle? Coming soon. Don’t miss the exciting conclusion!

Disclosure: all wine, food, lodging, and all transportation paid for by various interested parties. See http://barbera2010.com/ for details on the people and entities involved. My tasting notes have not been influenced in any way, nor has my work on this blog and/or my own site, but the content of any work appearing only on the official Barbera Meeting 2010 blog may (or may not) have been edited for content.