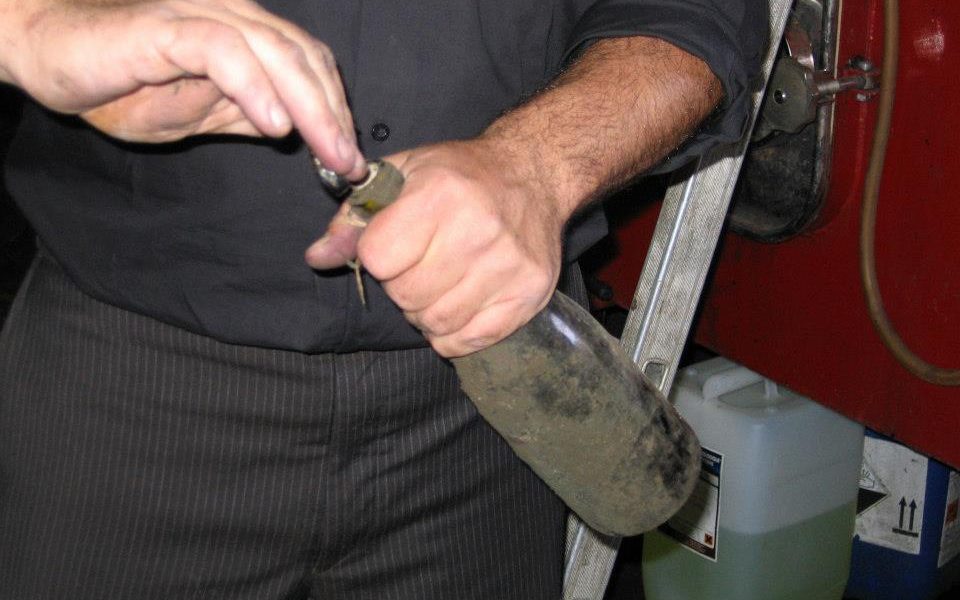 What is natural, and what is Natural? As explained in the previous post, “natural” is a guiding philosophy, not a set of rules. It’s possible (and even probable, given the lack of control inherent in the category) that no two natural wines are alike, and even more certain that any given set of natural producers will disagree on details of viticulture and vinification. Thus, a rigid external definition of “natural” is unlikely at best, and misguided at worst. Yet another reason to prefer “more natural” as the implied synonym, rather than bicker about this or that process leading to disqualification and banishment from the category.

Capital-N “Natural” is a placard. It’s a printed t-shirt, a social media fan group, an “ask me about indigenous yeast” campaign button. It’s a public statement that one is following principles one deems to be natural, because it’s important to the person making that statement that others know this. It’s a form of marketing. It’s coming out. It’s not necessarily a movement, though it often looks that way as commercial entities coalesce around the term. It’s an open self-identification as much as a philosophy, and what others think (and how they react) is now a matter of importance, whereas for a lower-case “natural” producer all that need to matter are the process and, hopefully, the result. Once interest moves beyond that to the market (of ideas or commerce), it’s no longer just natural, it’s Natural.

The whole idea of a Natural wine movement seems strange to oenophiles in many countries. Yes, there are importers and wine bars that trumpet “natural” as a guiding principle, but the majority of wine is not “natural” except in a very denuded sense of the term. (Nor, it should be stressed, is it ever likely to be.) There are natural and Natural producers everywhere, but the movement as a Movement – there’s that upper-case signification again – really lives and breathes in France. Especially Paris, where there are dozens of bars and restaurants that embrace, promote, and…after a fashion…are the only identifiable manifestation of Natural (vs. natural) that many will experience. There are establishments elsewhere in France, there are wine fairs and gatherings, there is a vocal and ever-growing base of media and fan support (and corollary hostility), and of course there are the producers at the heart of it all, but to really understand what Natural means and how it differs from natural, one needs to be on the ground in France, visiting both producers and their commercial advocates.

Any broadly-tasted observer of the natural scene might choose this moment to object, noting that an awful lot of the wines that fit into and in fact define this category come from Italy, despite a general hostility towards the concept in mainstream Italian wine circles. But the center of gravity remains in France. Why? Because it’s not about natural, it’s about Natural. Italians have managed to cobble together a few natural wine fairs as alternatives to VinItaly, but the seemingly genetic Italian antipathy towards organization and conformity makes the likelihood of a true national movement extremely unlikely. Even those Italian natural wine events exist mostly because they’re the nonconformist alternative, rather than an establishment position. If natural wine ever became a Movement in Italy, I suspect it would fall apart at the seams. (In fact, since there are competing natural wine fairs, in a way it already has.)

I and others like to joke that the French are terrible at marketing. In some ways, this is true. In others, it’s most decidedly not – what, after all, is the appellation system if not marketing codified into the very law of the land? – and when it comes to natural wine, producers seem to understand what I’ll call “marketing the minority” quite well. Capital-N Natural thrives because the alternative is the vinous majority, and there’s always something to position one’s self against. If that’s not marketing, what is it?

The odd thing is, France – for many wine drinkers – is already the alternative. Isn’t the Old World model of traditionally-made, structure-forward wine the philosophical opposite of the fruit-forward, low-structure, texture-oriented wine that has come to prominence elsewhere? Aren’t the legendary forms of French wine the very definition of one side of the traditional/modern dichotomy?

Yes, perhaps. But traditional/modern isn’t the same division as natural/interventionist. In some ways the practices of the naturalists are thoroughly modern, in that the rejection of control is based on a sound fundamental knowledge of the chemical consequences of each action. In others, they’re a modern freedom to market to a philosophy rather than live from sale to sale or bet one’s future on the reputation of one’s history and one’s neighbors’ histories, which is how the appellation system functions. But of course, the naturalists are in essence the über-traditionalists, rejecting not only the clever manipulations of modern winemaking, but also the tried-and-true manipulations of traditional winemaking. A naturalist, for example, might reject chaptalization even though it has been practiced by seven generations of her forebears, and even though it would allow a thoroughly traditional way of working and marketing the results.

One may work quietly but naturally and reap benefits anyway. A surprising number of producers do this, based on reputations already made and ensured by the quality of their wines or the fame of their sites. But others – especially the previously-unknown, whether they be newly-splintered growers who used to supply a cooperative, or young turks eager to prove their mettle – want and need a hook. Especially, in France, given the inherent (and arguably desirable) conservatism of the AOC system. That hook? Natural…capital N intact and, in this case, necessary…winemaking.

The thing is, a marketing hook inevitably leads to marketing-speak. And sometimes, that blather can be aggressive and hyper-critical, selling an old/new category of wine not on its merits, but solely on the points of difference and denigration that can be applied to the alternatives. Difference quickly becomes superiority, and superiority soon becomes a rhetorical target on which opponents of the Natural crowd can hang their objections.

Here’s the important exception: for some producers, tradespeople, and drinkers, “natural” may be a desirable characteristic all by itself. People make philosophical choices about their purchases and their foodstuffs all the time, and why should wine be exempt? For such people, a natural wine does have an inherent advantage over a less natural one, because of what it is. But let’s not conflate concepts: an increase in desirability due to naturalism is not the same as a purely qualitative advantage. One may, given a certain philosophy, reasonably conclude that a natural wine is more desirable than a less natural wine even though one thinks that the less natural wine is, by some personal standard of quality, “better”…just as (for example) one might choose local agricultural products over transoceanic products for environmental and philosophical reasons, even though this means a net loss in the quality and/or variability of available ingredients. Choosing natural is a very different thing than saying natural is, by definition, better.

Advocates of naturalism engage in their own bad faith when they merge the two concepts, whether they’re just plain ignorant or because they perceive there’s a marketing advantage to be had. A producer or consumer may honestly believe that natural wines are qualitatively better for any number of personal reasons, but they cannot demonstrate this to others beyond doubt or counter-argument, nor can they prove a correlation between nature and quality. Even in the most amenable of universes, one in which natural is a widely-recognized cause quality (and that is not necessarily our universe), there would still be those who preferred alternatives. In that universe, “manipulated” (or “Manipulated”) might be the same sort of marketing hook that “natural” is now.

(By the way, cards on the table: I tend to prefer, all else being equal, “natural” wines for philosophical and organoleptic reasons. I think that diversity is generally enhanced when adjustments are minimized, and I greatly value diversity. I think terroir is obscured when changes are wrought to a grape’s intended expression of itself and its site, and I very much value both varietal character and terroir. I tend to dislike some of the common vine and wine manipulations – primarily those that elevate alcohol, limit structure, and create or encourage specific flavors – that very often go hand-in-hand with an interventionist philosophy. There are qualitative exceptions to my philosophical preference in each of these cases, however, and that is why I can’t cast my lot with the Natural crowd, but can and do support the generalized goals of the natural set.)

So yes, there’s bad faith on both sides. That said, let’s not over-equate those sides. Natural (capitalized or not) producers represent the thinnest possible wedge on the pie chart of all wine philosophies. They are a “threat” to no one except the incomprehensibly insecure, and are an actual threat to no one at all, because they’re only an alternative, not a theocracy. How can the existence of one style of winemaking hurt any other style of winemaking., absent legislation (from which natural winemaking could not be more remote)? It can’t, of course. If the varying and competing styles of are qualitatively appealing , there should be room for everyone at the table. What there probably isn’t room for is pointless sniping over who can and should use which term, or who has the right to a concept, or whose philosophy is “better.”