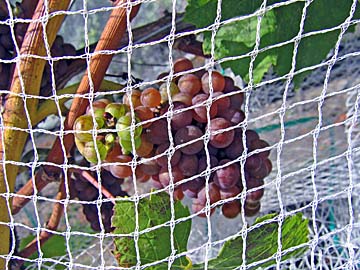 “This wine is red.” Say it out loud. Do any wine geeks within range raise immediate objections? No, unless they’re completely soused and apt to object to their own names unless supplied in song form. But is the wine actually red? Probably not. It might be magenta, purple-hued, infused with a pale salmon color, or bricking orange-brown at the edges. It might be nearly opaque, or it might be a faint tint in an otherwise transparent liquid. What it probably is not is plain-and-simple “red,” nor is exact correspondence with a specific wavelength on the electromagnetic spectrum necessary in order to employ the term. It’s not white, pink, or orange? Then it’s red.

How about “this wine is dry”? Residual sugar can be measured and quantified, certainly, but sweetness is an organoleptic response, powerfully affected by factors beyond a quantifiable measure. And the seemingly crucial fact that very few wines are actually entirely free of any and all residual sugar probably won’t enter into this discussion, because “a dry wine” doesn’t mean “zero residual sugar,” and wine folk understand and accept this as part of their shared language. There might, if there’s to be any debate at all, be a discussion of apparent sweetness as experienced by different tasters, but that will probably be the extent of the controversy.

So let’s try another short, easy-to-understand, and useful phrase. “This is a natural wine.” Quickly now: cover your ears, lest you’re deafened by the escalating responsive din. “Natural wine doesn’t exist,” you will be told, with impatience and, sometimes, actual exasperation. “Wine doesn’t make itself.”

Yes, because that’s exactly what “natural wine” means to those who use it: grapes that ferment themselves, fall into a bottle that’s sprouted from the ground, acquire both label and closure thanks to the charitable works of passing insects, and then walk (on newly-sprouted bottle feet) to the nearest port for transport and eventual sale. It is then purchased by fairies and leprechauns to be consumed at the Midsummer feast while conjuring unicorns.

(Why isn’t there an HTML sarcasm tag? Or is it better to just assume that the entire internet is enclosed within one instance of the tag?)

This increasingly tiresome debate continues along these lines, unabated, as more and more wines self-identify as “natural.” But a lot of the arguments are in bad faith, because people insist on a strict definition for “natural” that neither corresponds to reality nor is demanded elsewhere within the language of wine.

Imagine that, hypothetically, there are exactly one-hundred things that a winemaker can do between and inclusive of vine, must, and bottle that will change the nature of the wine: additions, subtractions, and transformations. A winemaker might do four of them, or all 100 of them. Which of those wines is less a product of nature and more a product of human ingenuity? That’s an easy question to answer, and unlikely to be debated. So why does identifying the opposite condition lead to such indignant rhetoric? If the latter wine is less natural, what’s wrong with calling the former wine more natural? Without even digging into the marbled meat of the matter, but instead as a matter of language, it should be clear that these disparate reactions don’t make a bit of sense. If one pole exists, so must the other.

And “more natural” is really the full extent of what “natural” means in common parlance. With one caveat: a natural wine is more natural than an arbitrary less-natural alternative, while (here’s the caveat) remaining within some arbitrary and personal threshold whereby deformative manipulations have been eschewed to the extent possible. (In other words, Kendall-Jackson can’t sensibly claim itself natural because they use two fewer techniques than Gallo, but seventy more than Edmunds St. John.) It’s not a boast that no human has participated in the process, it’s not an assertion that the grapes were magically transformed into wine by the wave of a wizard’s wand, and it’s not an insistence that absolutely no agricultural or technological measures were undertaken. It’s a philosophical approach to the craft of winemaking in which the myriad opportunities for control tend to be ignored rather than taken, and in which most choices remain unmade. That’s tend to be, not must be. Enforced naturalism is fundamentalism, and fundamentalism is not natural winemaking, it’s religious winemaking. In fact, it goes against the principles of naturalism in that it, too, is a recipe, insisting on rather than allowing specific choices during the winemaking process. This matters because far too many observers incorrectly conflate fundamentalism with naturalism, and in fact the insistence that “natural” can only mean one single (and impossible) thing is to insist that naturalism is a synonym for fundamentalism. Which it most certainly is not.

The other problem with a debate being conducted along lines in which “natural” is not allowed to have any meaning beyond fundamentalist purity of practice is that both it and all related and opposed terms become laden not with meaning, but with inferred (not implied) value judgments. But this need not be the case. The employment of the term “natural wine” does not inherently presume an opposing category of “unnatural wine” (which is certainly a laden phrase), it simply places natural wine near one end of a range of practices and guiding philosophies. To pretend that that range does not exist, and is not represented by many producers at each point along its length, is ludicrous. And yet, this is what deniers of the concept of “natural wine” claim to believe when they insist that the term is without meaning; if one end of the range doesn’t exist because it can’t, then the other doesn’t and can’t either, and thus all wines are essentially the same in both intent and result. Which they unequivocally are not.

Some posit that the problem is the word “natural” itself, claiming that it does imply an opposite, unnatural practice. But if the popular counter-argument to natural wine is that all wine is inherently unnatural, existing only as the work of man, then why object to “unnatural” at all? If this is the case, “unnatural” must be assumed as a synonym for the word “wine,” in which case “natural” has no meaning at all. But didn’t our objectors just decide that “natural” is a synonym for fundamentalism? Clearly, they cannot have it both ways.

Obviously, the actual problem with “unnatural” is that it’s not a particularly marketable word (to say the least), and the fear is that customers will reject it as a result. In reality, then, this set of definitional objections aren’t about definitions, they’re about positioning product in the marketplace. And that’s not a linguistic, scientific, or a philosophical debate, is it? This is an clarion example of an argument being undertaken in bad faith. The problem isn’t “natural,” the problem is the fear that it makes selling the alternatives more difficult.

So how about the alternatives? “Less interventionist,” “less manipulated,” and so forth. Better? No. In general, the same people object, and for the same reasons: how does one sell “more interventionist” and “more manipulated” in a wine market in which endless bullshit about the natural gifts of a pastoral, vine-covered countryside is peddled by the most industrial and mindlessly commercial wineries in the world, with fake jitneys, fake overalls, fake dirty fingernails, and depictions of moldy barrel rooms miles from the glistening tank farms of reality?

But here’s the bald truth: some wines are more manipulated, more interventionist, and so forth. Honest producers will tell you why and how they manipulate and intervene, and will be both proud and explicatory as they declaim their thoughtful justifications for each decision. The desire for control, or in a more comprehensive sense safety, are part and parcel of a directed, goal-oriented philosophy of winemaking, one in which the myriad opportunities for meddling tend to be embraced rather than ignored. This is not bad. Let me repeat: this is not bad. A huge percentage of the greatest wines of history have been made with this philosophy, and great wines are still made this way. There are many paths to beverage brilliance, and naturalism is not the only one.

That said, a given producer, importer, seller, or drinker may choose – or prefer to choose – wines in just one mechanistic category, for reasons that seem good to them. This should not be viewed as an opportunity for opprobrium, as it so often is by winemakers (nor their fans) who manipulate more rather than less. Rather, it should be emblematic and celebratory of the diversity provided by a modern, scientific understanding of winemaking that allows, rather than forces or narrows, decisions in the vineyard and cellar. Natural winemakers who are not just following the recipes of yesteryear – and there’s nothing inherently wrong with that path, either – are able to make a philosophical rather than practical choice because they have a fair idea of what will happen as a result. This is not really a rejection of the technology that their neighbors employ, but rather an embrace thereof for the purposes of rejecting its use. That’s an important difference.

Those who grow virulent at the mere mention of the word “natural” are ignorant at worst, but at best perhaps understandably tortured by the baggage the word has been forced to carry. The virulence is even more amusing when one understands that natural wines are a tiny percentage of all available bottles, and that the strength and volume of the objections are far out of proportion to the market presence of the wines that actually self-identify as natural. This, too, is explained not by an earnest desire for linguistic precision or rigid taxonomic categorization, but rather by resentment and hostility over the implications – though I rather suspect inferences are actually at work – of the terms for wines not categorized as “natural.”

So that covers the bad-faith arguments by those who oppose naturalism. What about the other side? For they and their arguments draw hostility from many who are not part of the natural crowd, and not always unjustifiably.

Well, there’s another category of natural-ness that’s not just a matter of less intervention, and I think it causes much of the artificial hue and industrial cry over the term. My personal shorthand for this category is Natural, as opposed to natural. And what does that seemingly insignificant capitalization mean?