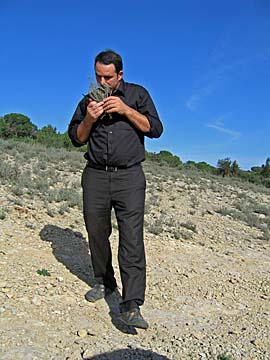 “The man in black.” That’s my scribbled-down description of the winemaker we’ve come to visit, and it fits; he is, in fact, dressed head-to-toe in the color of night. Dark clothing, to befit a dark wine.

Minervois is a known name, thanks to a lot of hard work on the part of a relatively small number of dedicated producers, importers, and retailers, but it’s most definitely not a well-known name, and the search for greater affirmation is a long, uphill struggle against the forces of multinational marketing. It doesn’t help that a lot of the wines that carry the name never really rise above mediocrity…though given the lack of acclaim and monetary reward that follows those that do, the desire to put in the necessary work has to come from somewhere other than the hope of remuneration.

The vignoble of Minervois is visually and functionally hardscrabble, and that probably doesn’t help in the elevation of spirits. Staring at a field of rocks from which gnarled vines struggle to emerge and plump up a few angry grapes isn’t like gazing over the verdant plains and hillsides of certain other regions, nor are many vines neatly trained into efficiently-pickable rows. One can see the work that will be necessary, and the heartbreak that sprouts from the earth, and the indifference that droops from the leaves, in every beaten-down vine. And yet the region is absolutely carpeted with vineyards. That’s a lot of despair to crush, press, and ferment. But it’s a way of life, and that’s not easily abandoned.

Thankfully, there are a few producers who put in the necessary work, and their truculent, embittered vines have decided reward the attention with a grudging but admirable harvest of quality. Jean-Baptiste Sénat is one such producer.