Boxler 2012 Muscat (Alsace) — Surprisingly reticent for a muscat, taking what used to be a fairly common alternative Alsatian expression of “extremely floral riesling” more seriously than most. (10/16

La Pousse d’Or 2005 Pommard 1er Cru Les Jarollières (Burgundy) — A polished wall of fruit, but the insistence that this is unapproachable is misguided; it’s nothing magnificent at the moment, for sure, but it’s eminently drinkable. I had fears regarding storage for this bottle, hence the infanticide. (10/16)

Thomas Coyne 1999 Syrah Detjens Farms (Livermore Valley) — Pepper, herbs, liquid smoke, a lot of humid airspace. Whatever maturation was going to happen has, I think, happened, and now it’s a process of thinning. Drink up. (10/16)

Blanck 2012 Auxerrois “Viellies Vignes” (Alsace) — Very nervy for auxerrois, which so much more often provides the flesh for pinot blanc’s verve in bottles only labeled the latter. But there is flesh, and weight, and yet it’s the cut that’s so exciting here. Should it age? Auxerrois’ not known as a long ager, but why not? (10/16)

i Clivi 2002 Colli Orientali del Friuli Galea Bianco (Friuli-Venezia Giulia) — Memory engraved in amber and then preserved in wax. Like drinking patina, bee-etched, cool stone slopes reflected the last bronze of a sunset above a field of sleeping vines. (8/16)

i Clivi 1999 Colli Orientali del Friuli Galea Bianco (Friuli-Venezia Giulia) — At first, this was so aromatically mute I worried it was corked. But it wasn’t. It blossomed and burled all night, and by the time I took it home it was singing a full-throated song of lanolin and bone echoing off the spine of a distant mountain. (11/16)

Château Fontenil 1994 Fronsac (Bordeaux) — I expected tired, tannic, and woody. It’s certainly not in the prime of its life, and there’s some woodsmoke (more with a half-dozen hours’ air), but otherwise this — even with Rolland’s name scribbled all over the label — tastes reasonably traditional, leaning heavily on tar and decayed leaves. Drink up, though. (9/16) 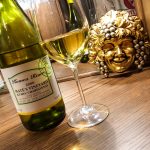 Kumeu River 2000 Chardonnay Maté’s Vineyard (Kumeu) — This was, I think, the last cork-finished vintage at Kumeu River, and it was somewhat amusing to not be able to just twist it open. It’s aged well, with the minerality it showed in its youth now fully fleshed, its brighter fruit turning to bronzed representations thereof, and yet all the lively structure still intact. Some complexity. Very, very well balanced. It could go a good deal longer, I’d think, and more complexity will undoubtedly result, but for my palate I’d think now to five years from now would be ideal. New Zealand can make world-competitive chardonnay, and Kumeu River is a proof of concept. (8/16)