Ollivier “La Pépière” 2004 Muscadet Sèvre & Maine Sur Lie Clos des Briords “Cuvée Vieilles Vignes” (Loire) — Broad and deep. As purely intellectual a vinous exercise as I’ve encountered in some time; all the pleasure to be found from drinking this requires attention and understanding. There’s no way this would ever be appealing to the soif crowd, unless they’re absolutely prepared for the experience. All that said, it’s brilliant wine at the top of its game. (11/16) 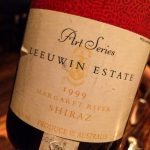 Leeuwin Estate “Art Series” 1999 Shiraz (Margaret River) — Blackberry syrup and soy. I suppose this has aged, but my memory is that it was less sludgy in its youth. It’s in no danger of cliff-diving, so I suppose it might be interesting to see where it goes from here. (11/16)

Loi “Nùo” 2013 Vermentino di Sardegna (Sardinia) — Skin contact, with all the leveling, asymptotic effects that portends. It’s still more refreshing than Dettori (isn’t everything? well, except Cornelissen), but it’s very heavy, and I’m not seeing the vermentino here. All that aside, I like it, in its lead-on-the-tongue sort of way. (11/16)

La Pépière 2009 Muscadet Sèvre & Maine Clisson (Loire) — Two bottles. First is partially oxidized, likely due to cork failure. Second is tentative and restrained; an infinite blank plane of unwillingness. I’m not sure how to judge its future, given these performances. (11/16)

McFadden 2013 Gewürztraminer (Potter Valley) — Acrid, sweaty, mean. Only a little bit of snappish apricot rind gives any indication that this is gewürztraminer. Poor. (11/16)

Ridge 2001 Geyserville (Sonoma County) — Unraveling a bit, but the yarn is still beautiful. Mixed berries, their acid more on display than usual, and a fraying oak/tannin structure. Drink soonish. (10/16)

Blanck 2001 Gewurztraminer Altenbourg (Alsace) — Lychee and steel, crystals and bite. Off-dry, for sure, but there’s plenty of acidity. Hold longer? No danger in doing so, but no real reason to either; I don’t think this has bacon in its future. (10/16)